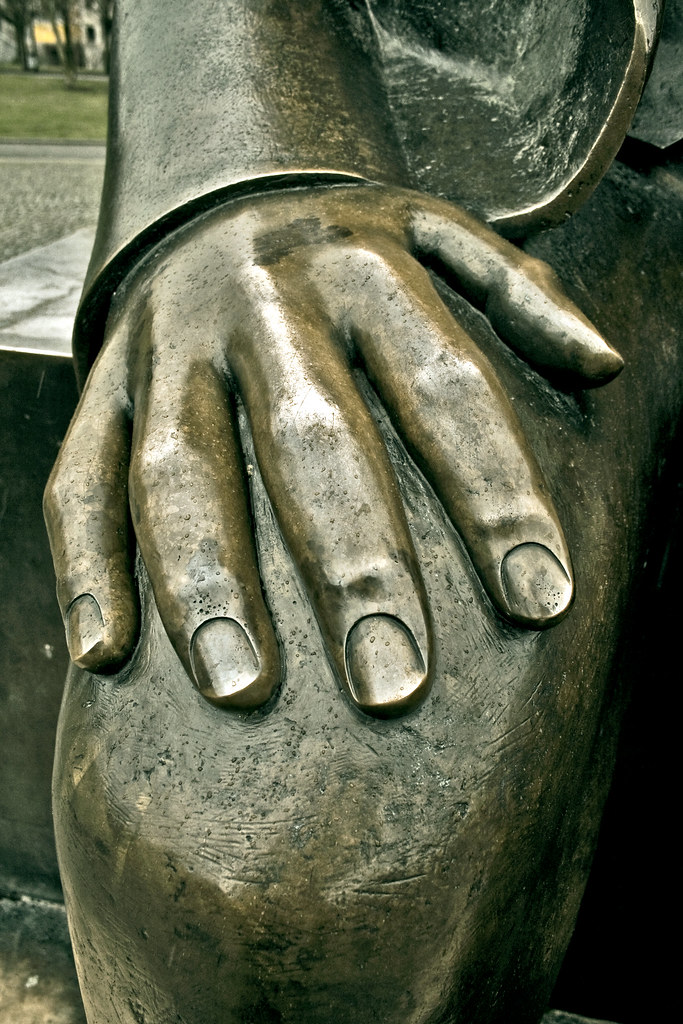 "Marx i Engels IV" by Jose Téllez is licensed under CC BY-NC-SA 2.0

Moishe Postone was an intellectual historian, critical theorist  and political economist who was the Thomas E. Donnelly Professor at the  University of Chicago. He was renowned for his reinterpretation of  Marx’s theory of value, outlined in his landmark tome, Time, Labour and  Social Domination (1996). He passed away on March 19, 2018. Former  student and KR editor Rebecca Liu reflects on his teachings and  influence here.

My fourth year at the University of Chicago was full of personal  missteps and questionable decisions typical of any 20-year-old who has  not enough responsibilities and has had too much free time. Asking  Moishe Postone whether he could supervise my thesis was one of the rare  exceptions in a year otherwise marked by poor judgement. His  contributions to Marxist scholarship are vast and noted. Take his his  contention that Kapital was never merely ‘a critique of capital  from the standpoint of labour’, but rather ‘a critique of capital from  the standpoint of labour in capitalism’ (in plain English, this  means that the revolution should not aim for the glorification of  labour per se, contrary to the many Soviet realist paintings of  sanctified peasants on tractors, but should rather bring about the very  eradication of labour as it currently exists under capitalism itself; or  in yet plainer terms, fuck work!). And yet, this intellectual  might was matched by a far subtler — but just as important — dedication  and engagement in his teaching.

A bachelor’s thesis is a 20,000-word effort often produced in the  last year of university, written under the careful supervision of an  academic. By the time we were encouraged to contact potential  supervisors at the end of third year, I had known of Moishe Postone as a  distant but towering intellectual giant, who mostly taught graduate  students while also directing the undergraduate ‘‘Self, Culture, and  Society’ social theory stream from afar. I suspected that taking his  supervision would entail too painful a blow to my precarious and  delicate self-regard, which was then disproportionately built on  presumptions about my sizeable intellect, combined with a basic  self-involved inability to accept criticism.

‘He really is the best person to work with considering your  interests’, my graduate tutor told me when I voiced my hesitations. In  spite of all my intellectual posturing, I felt like a fraud. People who  get to work with Moishe Postone, I told myself, were blue-blooded white  men with deep familial credentials with the Euro-American literati, and a  congenital ability to spout off all variants of Marxist theory at the  bat of an eyelid. Where did I — a twenty-year-old girl of  first-generation immigrants, who couldn’t even spell, or even pronounce,  over half the names of various white European men attached to the canon  of critical theory — figure in this unfortunate but inevitable march of  the Academy to reproduce its filial intellectual elite?

And yet I found no such hubris or haughtiness in our office hours.  Yes, there was a certain gravitas to Postone’s character that, combined  with his candour, could be intimidating and even devastating. ‘No. This  is not what she means’, he once wrote in the sidelines to a paragraph in  which I discussed Hannah Arendt’s ‘banality of evil’, causing a sense  of consternation and hurt in me that far outstripped anything that could  be produced by a boy turning me down. ‘What are you really trying to  say?’, he said another time, in a particularly difficult office hours  appointment held mid-year. With three months to go before the submission  date, I had a half-baked argument, a collection of words that said  nothing and went nowhere in particular, and no sense of what I was  doing.

The stakes in these small conflicts were never about the satisfaction  of his ego, but rather the integrity and clarity of the work at hand,  and my own intellectual growth. I never felt condescended to, or  demeaned, but rather treated as a fellow traveller. There was also  praise, as powerful as it was crisply delivered. His comments that ‘this  is intelligent’, ‘this is interesting’, and suggestions to pursue PhD  programmes, remain front and centre in my ‘why you should believe in  yourself’ mental pantheon, which I have ceaselessly plumbed and milked  in my many breakdowns due to imposter syndrome — or just the inevitable  difficulties of life — since.

There’s much to be said and celebrated about the greatness of his  intellectual legacy; and yet, the past few months have spoken to  pitfalls of celebrating ‘great men’ on the sheer basis of their academic  and cultural contributions. In Postone’s case, he was not only great in  the hackneyed sense, but also in the more heartening sense. It is easy  for a celebrated philosopher to dismiss the musings of an undergraduate,  to despise the ‘mandatory office hours’ system and the face-to-face  engagement with students it requires — lesser men have done as much. Yet  he treated me with a startlingly uncomplicated degree of respect, even  going as far as to suggest that the supervision was a mutually  educational project for us both.

‘If you ever get in and run out of things to talk about’, a fellow  undergraduate advised me, ‘just start talking about trains. He loves  trains.’ Indeed he did. He also loved food — he occasionally went on  tangents reminiscing in painstaking detail about this transformative  meal he once had in Tokyo; why goose meat is better than turkey meat  (and therefore, Thanksgiving is a mediocre holiday). There were  meditations on the history of Hyde Park — ‘it was very bohemian. There  was East Village in New York; Berkeley, and Hyde Park’. ‘I’m not sure  how I feel about artists, actually. Especially when they’re not good’, I  said tentatively. ‘Yes, they’re obnoxious’.

My thesis was on the nature of political violence, taking as its major starting point Merleau-Ponty’s little known book Humanism and Terror: An Essay on the Communist Problem,  a book that I picked up — and then kept without asking — in my college  dormitory at the end of my first year. In working with Postone about  postwar France Marxist philosophers, our conversations often turned to  the state and situation of the Left today. The more fundamentalist edges  of my studenty leftism were refined, sharpened down — or, even  defiantly left in tact — through our discussions. One of the first  essays he pointed me to was History and Helplessness,  a formative essay on my own thinking about the blinkers hampering the  contemporary Left. Political fidelity was never the goal in these  discussions — ‘you know you don’t have to just nod’.  The real lesson  was the importance of continuing to honestly and carefully critique the  world around you — extending your critical eye, especially to the  practices and beliefs in your own camp.

In one session, he asked me about my plans for the future. ‘I don’t  know’, I said, ‘I think my parents probably want me to, maybe work in a  bank or something.’ I then admitted that I had some vague ambitions to  go into academia, ‘maybe in something critical theory-related’. He  remained devastatingly honest: ‘PhD students are in trouble’ before  softening his tone; ‘but you have to do something that grabs you’. It is  a principle that I try to apply to my life every day, though there is a  certain degree of irony to be found in how, through his guidance, I  have been able to see with far greater insight the structural forces  around me that continue to inhibit, suppress, and foreclose the  possibilities of genuine emancipatory humanistic life. Yet, there may be  a way out. Once, after a fairly depressing talk about the potency of  contemporary capital, I asked him what the Left needs to do against this  all-powerful beast: ‘Organise’.