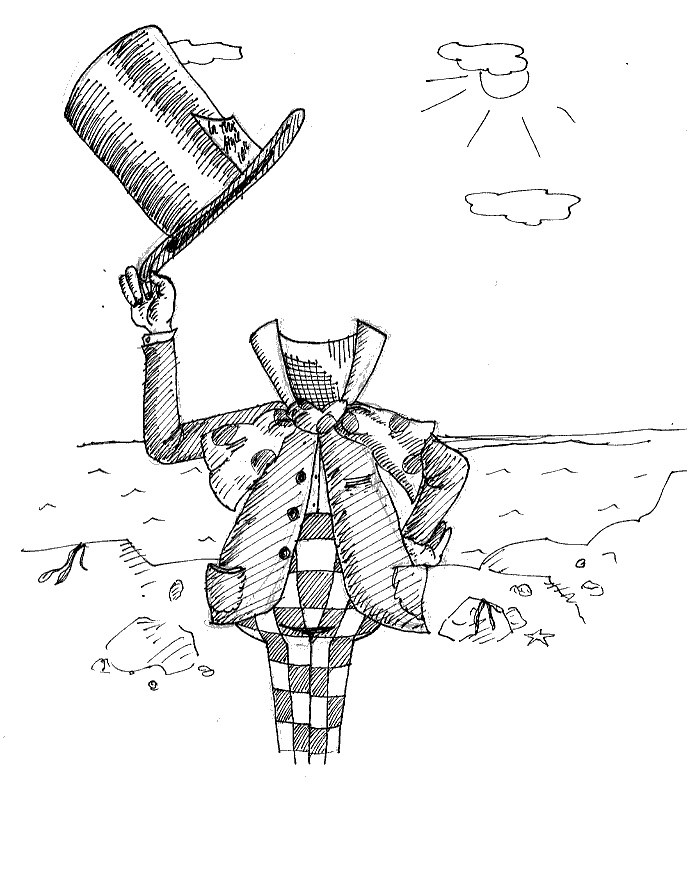 I was about eight at the time, and when I chewed on my cap  afterwards it tasted like seasalt. We were in a Cornish village on  holiday, and I was scampering across the harbour walls, wearing my cap,  when a flurry of wind snatched it off my head and dumped it in the sea.

The crown of my head, exposed, forms a tough little peak like the tip of a boiled egg, ready to be cracked open with a spoon.

I’m thinking about the Mad Hatter, and about madcaps, mad hats. Carroll’s Hatter is ‘mad’ (mad as a hatter), according to Alice speculators, because hatters, susceptible to mercury poisoning from the fumes produced in the hat-making process, often did  go mad. The Hatter, who claims to be stuck at an endless tea-party  after a quarrel with Time (‘ever since that […] he won’t do a thing I  ask! It’s always six o’clock now’) is, like so many of the creatures  Alice meets, all caught up in the dead ends of meaning and the strange  interferences between reality and language. Hats, though, are eccentric  things anyway. They can drastically change our silhouettes: in the  classic Alice illustrations by John Tenniel, the Hatter’s hat is  bigger than his body. And hats are the most superfluous kind of costume  piece, are made to be removed. Chapeau. Hats off to you.

There is something especially haunting about a hat out of place: a  hat without a head, without a face. I remember staring down horrified at  my cap bobbing insolently about like a little blind bird on the water  until my dad heroically swam out to rescue it (because it wasn’t really  very far out and because that’s what dads do). And when I visited the Magritte exhibition at the Art Institute of Chicago  this June I was bewitched by his ubiquitous bowler hats: sitting like  found objects, unperturbed, or bobbing above empty spaces where faces  should be.

I am putting my thinking cap on.

There is a certain propensity, proper to childhood, for seeing faces  in things. Cars and stones and bits of wallpaper and the sandwich on my  plate conspire into face-like constellations. The world seems to want to  look back at me, to speak back to me. Lying in my floral-sheeted bed at  night in my first and best remembered bedroom, I would stare at the  wall unsleeping and in my dreamy state the face of an old wise man would  appear in one of the knots in the wooden beam by my bed. As my mind  drifted his face grew distinct, contouring itself out of the dark wood. I  remember it very clearly, the face I fell asleep to every night.

This face by my bed seems alive and unwilled, a stubborn kind of  object life, insisting in gaps and empty spaces. But the thing, I think,  about faces, is that they are not accidental: are not things found but a  making of things, or a seeing, a screening, a way between things. The  face I think I’ve found is a face I’ve daubed onto things. Which means, I  suppose, that the face by my bed, or in the triangle cutouts of my  sandwich, or up in the clouds, is all my own. There is a world beyond me  and it is made up of strange fibrous stuff and things and in all its  numb opacity I put it back into my own image. The face the world seems  to take is the image of my own hungry search for correspondence, for  intimacy.

As we grow older and the world grows a little less lithe, a little  more familiar (though no less strange), faces stop appearing in things  and become something more of a chore. ‘I have no head for faces.’ Faces  fade or blur or stop equaling intimacy. The spontaneous simplicity of a  face gives way to those more complex experiences of misrecognition,  altered recognition, the strange-in-the-familiar, the not-quite known.  We come to know intimacies turned away or amputated, intimacies  complicated. Or (worse?) intimacies turned commonplace, turned cliché,  the bored or replaceable or the troped. The world seems to turn its face  away. Turn your face away and you expose your neck. Your neck: a stupid  tube of veins, blank flesh, faceless or defaced. De-faced, necks are  made for kissing, but also for decapitation, and with that we’re back in  Wonderland. (‘Off with your head.’)

The unearthly thing about those Magritte hats and my lost floating  cap has something to do with the turning away of the face and the dead  blankness left over where it used to be. To a child, a face is a place  to return to, a place of reassurance, a place drawn out over and over,  like my wise old man in the wood. Face implicates character, character which comes from the Greek kharakter,  which means engraving, which makes a character the static trace of  something, a scratched-out point of recognition and return. Why are hats  mad? Maybe because, when authentic recognition or meaning starts to  falter, I try to catch you, which means to try to trace you back,  characterize you. A silly thing to do, really, a madcap scheme, but  there we have it: I’m growing up.

Hatting madly or madly capping, trying to remember things, claw them  back into place. Or looking for a face in the wall and not finding it  this time, which is an anxious, an un-homely sort of a feeling. One that  makes it harder to fall asleep.