Twin speak: reflections upon the doubles in lynch’s ‘Twin Peaks’ 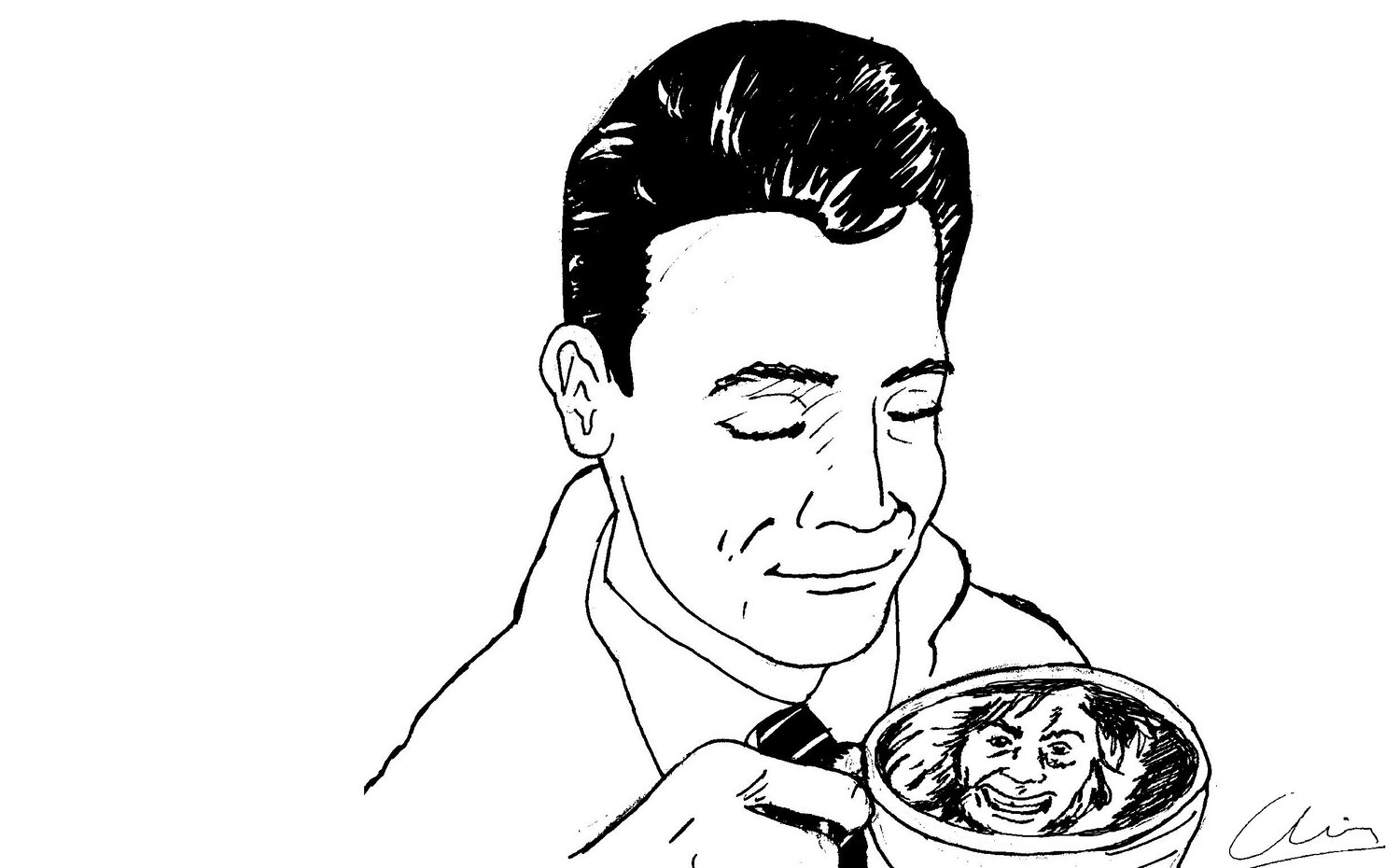 This article contains serious spoilers, and probably won’t make much sense if you haven’t already watched the show to its conclusion.

‘Twin Peaks’. The show’s name alone conjures an image of two  corresponding mountaintops, matching snowcaps and stern gradients rising  out of mutually mysterious forestry. And true to the name, Twin Peaks  is a show about doppelgängers, doublings, dualities. Doubles and  doublings have a rich history as a literary trope, most notable in works  like Nabokov’s Despair and Dostoevsky’s The Double (for more on this theme, see Polly Dickson’s excellent essay “Butterflies, Mimesis, and “The Double”  in this publication). Doubles are a way of getting at the dual  character of human nature and morality, of the split between good and  evil present not just between different people, but within individual  minds and bodies. The writer and director David Lynch, one of the show’s  creators, draws on the theme of doublings across his work, finding and  presenting the same uncanny horror and ‘vision of terror’ in doubles  that Freud describes (Sigmund Freud, The Uncanny, 1919). Below, I offer  some brief thoughts on the ways in which Lynch’s televisual masterpiece Twin Peaks might fit in with such a project of doubling, ahead of the release of the long-awaited third series.

The motif of doubling in Twin Peaks first becomes truly  apparent, I think, in the striking visual similarity between two of its  main characters: Audrey Horne (Sherilyn Fenn) and Donna Hayward (Lara  Flynn Boyle). On screen together, they look alike right down to the  stage-left flick of their weightless hair-dos; immaculately turned-out,  pale as snow, eyes deep and soulful, they are of a type, of a height,  and of one appearance. It is therefore less surprising than it might  have been with other characters when it is later revealed that the two  are, in fact, step-sisters, both born of Ben Horne. In an early scene,  A.H. and D.H. stand side by symmetrical side in a bathroom, discussing  Laura’s death — the one who dislikes her, the other her best friend, but  both claiming to understand her better than anyone else, and both  drawn, mothlike, towards the fiery mystery that is Laura Palmer.  Reflected alongside one another in the bathroom mirror, like some human  Rorschach test, they are a fourfold image of visual consistency, a  doubled doubling that resonates with significance in the eyes of the  viewer.

Lynch and Frost are inviting us to compare the two, to notice  not only the visual similarities, but the spiritual parallels, and the  jarring but corresponding difference that cuts the pair in half. Lynch  and Frost want us to notice that they are Laura; each is a piece  of the puzzle that adds up to the enigmatic, fragmentary, dualistic  Laura Palmer. Doctor Jacoby is good enough to explain for us the nature  of Palmer’s soul, as well as one of the early symbols in the series: “The necklace, a divided heart. Laura was, in fact… well she was living a double life. Two people.”  Donna is the good girl, the one who knew Laura as a kindhearted and  generous friend, who, like Laura, plays a central and supportive role  with her family structure (though she, like Laura, has a sundown side to  her self, always ready to slip out of an upstairs window after  nightfall to pursue some line of inquiry or whim of the heart). She is  the part of Laura ready to embrace tenderness, she is that pure part of  Laura which James loves and which loves James. To be expected, then,  that she should replace Laura as his lover the night directly after  Laura dies, and even less surprising that the dualistic Laura also had  an opposing, aggressively macho lover in the form of the belligerent  Bobby. Donna, lady, Laura the Lady. “It’s like I’m having the most beautiful dream, and the most terrible nightmare, all at once.”

Audrey, meanwhile, is that side of Laura which is attracted to wild  transgression (though Audrey will never go quite so far as Laura). She  is in love with Special Agent Dale Cooper (the superb Kyle MacLachlan),  and in love with the idea of a love that will overstep and overflow the  boundaries of age, of professionalism, of society. Unlike Donna, she  circumvents and undermines the closeness of the family, sabotaging her  father’s business deals, and sneaking around between the walls of the  Great Northern to spy on him, falling into the gaps between domestic  spaces. Audrey claims to be investigating the shadowy business at  One-Eyed Jack’s on behalf of her ‘Special Agent’, but she, like Laura,  is fatally attracted to dangerous flames, vice-ridden vileness the likes  of which she uncovers in the casino and brothel. She seems to want to be  Laura at her worst, to follow her into her world of darkness. Audrey  quickly realises she has gone in too far, submerged herself too deeply,  praying to Cooper and telling him ‘I’m in over my head’.

Remember that Donna, too, takes up the investigation of Laura; not by  following in Laura’s dark footsteps, but by tracing the trail of the  benevolent and caring Laura. She briefly takes up Laura’s old Meals on  Wheels round, fulfilling Laura’s commitment to the community to uncover  clues about her demise; she, like Audrey, is irresistibly drawn to  living one aspect of Laura’s multifaceted existence. It is on these  rounds that Audrey finds Laura’s diary — not her regular diary, but ‘the  Secret Diary of Laura Palmer’. Two selves, two diaries; one overt, the  other occult. Audrey and Donna both face physical and psychological  dangers during their individual investigations, but only Audrey faces a  farcical and repellent reenactment of Laura’s eventual destiny. At  One-Eyed Jack’s it is revealed that ‘The Boss’ is none other than her  father, Ben Horne, and that horny Horne has one eye on the body of his  own daughter, The New Girl. Catching no glimpse of her face through the  drapes around the outside her bed, he tears into the interior lustily  and lasciviously, only to discover that The New Girl has put on a mask.  This masqueraded reimagining of Laura’s own incestuous abuse, at the  hands of Bob-controlled Leland, plays out in disturbing fashion, and is  finally (thankfully) interrupted by Ben’s own double, the boisterous  brother Jerry. Audrey’s mask never slips; for Laura, Cooper’s  investigations across the show are the slow and posthumous removal of  her own mask — the one Laura obfuscating the presence of another.

Once you begin to uncover and unravel the doublings of Twin Peaks,  you realise it is the central impulse of the show, and twins and  mirrorings become quite impossible to avoid. Maddy Ferguson, Laura’s  cousin, is introduced to the show in case anyone missed the subtlety of  the Audrey-Donna mirroring. Played by Sheryl Lee, who also played Laura,  she is a crucial device in the series. Doctor Jacoby (he of the  dual-tinted spectacles) is deceived into thinking he sees Laura when  really he observes a disguised, wig-wearing Maddy. Maddy’s plot arch is  completed with the darkest pronouncement of the series: “It is happening again. It is happening again“.  Leland, under the spell of Bob, murders Maddy — murders, in his own  mind, his own daughter, again, twice sacrificing her to his own insane  and insatiable desires.

Laura might be two people in the sense that she is one self eclipsed  behind another; a private and a public persona dramatized in the  Lynchian obsession with daylit suburban spaces and jovial coffeehouses  (the doubling in ‘Double-R-Diner’!), and darkened and ruddily tinged  domestic interiors. But Leland, by distinction, is something else. He is  truly two people in one body, at conflict with himself,  self-destructive, emotionally fraught. His frenetic, frantic dancing  belies his grief but bespeaks the joy of his inner demon, Killer Bob.  Who killed Laura, Leland or Bob? This is, of course, a question central  to the second series, and one which must remain unresolved — the  surrounding clouds of uncertainty more powerful than any possible  answer. It ties into a larger question, though, one which animates all  life and causes all death in the town of Twin Peaks: is there not a Bob in every one of us?

Bob is that evil side of Laura, the part that we might imagine was  killing her before anyone else had a chance to do so. But that evil  exists elsewhere in Twin Peaks, and Bob can inhabit any body,  anyone. The other ‘Bob’ of the series — Robert Briggs, bratty Bobby  –reminds us, on the inappropriate occasion of Laura’s funeral, that we  did this, all of us. “Who killed the Prom Queen? You did. We all did.”  The townsfolk of Twin Peaks that saw her suffering and failed to save  her, yes. But also ‘us’, the viewers, we are culpable too. Because Bob  is in a part of all of us, a part of us we all have, an inner  countenance capable of mischief or malice or murder. The darker side of  human nature made corporeal, realized in shocking lank grey hair and a  crooked maniac’s smile. Agent Cooper is a force for good in the  universe, but what would you get if you took that refined, rational mind  and geared it towards the cause of evil? Lynch and Frost supply the  answer: Windom Earle. Calculating, cruel, the creator of supremely  sadistic riddles way before Saw was on the screens, he is an  exact inversion of the beloved special agent, the man who must solve  those riddles, who takes pleasure in doing the duty of the good. The two  become poised for a final dualistic dual as the show winds to a close:  Black Lodge, White Lodge. We cannot be certain of the exact fate of  Cooper come the end of the original show, but we know in our heart of  hearts that the wicked grin, the self-harming madman doubling his own  blood-smeared image in the bathroom mirror — that cannot be our Cooper.  We saw the strangeness of the double-Coopers in the Black Lodge, and we know  it must be the evil inversion which has escaped. Bad has triumphed over  good as it did for Laura, this time in the collision of two bodies, not  the inner turmoil of one.

What new ground will be trodden in the long-awaited reprisal of the  show? How will Cooper have escaped his own double, how did White conquer  Black like some final, fateful game of chess between Cooper and Earle?  The original show offers no answer, but it has always confronted bigger  questions. If we hold our hands up to our screens and trace, childlike,  the patterns of the doubles, the twins, the mirrors, the dualities of Twin Peaks,  we might catch sight of ourselves reflected in the gentle curve of the  television set. The basic function of art is to mirror the world, to  mirror our inside worlds; when we see Audrey and Donna in front of the  mirror in the bathroom, we may well sense that we are also watching our  own twin-selves, engaged in an encounter with the artwork. We might  think about what we hide in our own selves, what we confront, what we  will ourselves to be, what we wish ourselves not to be. That of which we  know we are capable, and that of which we fear we might be capable. We  might, if we are honest, discover two selves in our selves; two of us,  two inner landscapes. “Two worlds: fire walk with me.”