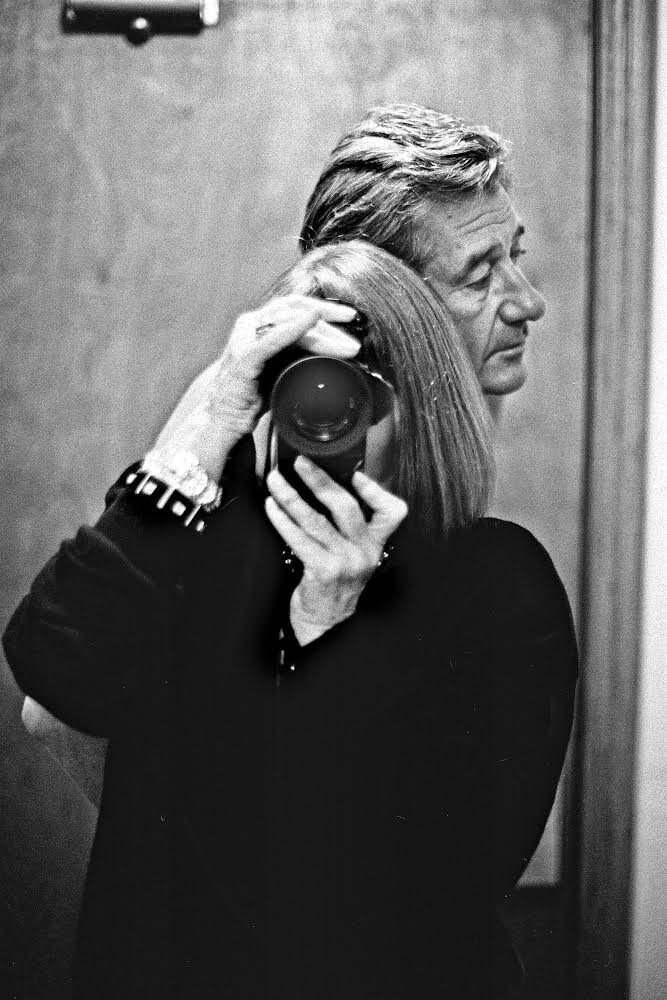 Controversy has routinely accompanied Helmut Newton’s  photography. When feminists denounced him for reducing female sexuality  to silent, naked bodies, Newton retorted that he actually adored women,  and hence fashioned them as strong and gracious subjects. As critics  accused him of voyeuristically exhibiting women’s intimacy, Newton  countered that his photographs portrayed perfect female strength. Today,  nudes have mostly lost at least their provocative effect. The internet  provides a catalogue of nakedness: black, brown, white, old and young,  vintage, bondage, fake and fake-real, enlarged and amateur. So, how does  the routine availability of naked bodies change our interpretation of  Newton’s nudes? What kind of intimacy, if any, can we rediscover in his  photography today?

‘Us and Them’ exhibits photographs Helmut and June  Newton took of each other (‘Us’) alongside portraits of the rich and  beautiful (‘Them’). Helmut and June Newton collaborated throughout their  marriage. June abandoned a promising acting career in her native  Australia, where she had met Helmut, when the couple returned to Europe  after the Second World War. When Helmut Newton’s career took off, June  curated and edited his works, and acted as art director for most of his  shoots, a role she continued until his death. In the 1970s, she also  began to photograph successfully, under the pseudonym Alice Springs  (also to avoid too close an association with her well-known husband).  Thus, Helmut and June Newton’s professional careers intimately  intersected with their private lives, through manifold layers of  support, dependence, and love, until his tragic death in 2004.

In the first part of ‘Us and Them’, double portraits,  taken by Helmut Newton and Alice Springs respectively, show glamorous  celebrities. The contrasting images reveal how differently Newton and  Springs approached photography.

Newton’s black-and-white photograph of the Danish  model and film star Brigitte Nielsen shows her standing in an elegant  room at the Hotel Hermitage in Monte Carlo. The contrast is low, both  model and background are well-lit; an opulent, open double-door enframes  Nielsen, giving the photograph a highly-stylised atmosphere. Nielsen,  towering from black shoes to her ash-blonde hair, is in the nude, a  dressing gown slides off her shoulders. Her body is seen from the side,  concealing her crotch, with her left breast exposed as Nielsen turns her  head towards the photographer. Heels add to her spectacular height.  Nielsen glances nonchalantly at the camera. Flowers and a lavish  interior complement her elegance. The power dynamics are intricate: the  model seemingly dominates the surroundings; but it is the photographer  that manipulates her body into a representation of his desire and  fantasy. The camera does not simply capture, it also creates. However,  how model and photographer negotiate the particular power dynamics in  this act of creation – of arrangement, manipulation, and the display of  strength – remains cryptic.

Newton fashions Nielsen into a grandiose woman, an  emblem of authority and power, rather than depicting a complex human  subject with fears and flaws. Nielsen dominates, conscious of her  strength and beauty, at ease with her nudity. This photograph  exemplifies Newton’s creation of heroic femmes fatales rather than  real-life characters. He flattens and elevates his subjects: instead of  portraying character depth, Newton magnifies what he most adores in  women, their power. Behind the lens, however, the man who holds the  camera effects the fashioning, and exerts the real power over the  subject. Newton’s nudes represent his flattering fantasies. Nonetheless,  both the photographer and the subject appear complicit in producing the  potent imagery, although the particulars of the power play escape  precise analysis.

Critiques of Newton’s ostensible fetish remain  relevant. Newton creates through manipulation. His women certainly are  unreal, but they are also crucially dissimilar from alternative images  of unreal female bodies. There is pervasive presence of  differently-sexualised women in internet pornography, begging to please  faceless, male bodies, or of amateurs seeking anonymous ‘likes’ for  their simplistically-stylised, mirror-selfies on Reddit’s ‘Gonewild’, in  which their cleanly shaven vulvas expose an alternative male sexual  fantasy: the eternally childlike, docile teenage-woman. If only by  contrast, we can now revaluate Newton’s worshipping of an enhancing,  perhaps more admiring, paradigm of the mature and powerful female,  despite its barely-hidden fetish for strength and domination.

By contrast, Alice Springs’s portrait of a fully  dressed Nielsen is a close-up, from waist to head, taken at the  actress’s Beverly Hills home. The background is almost indistinguishable  from her elegant black dress; the contrast is high. The focus rests on  Nielsen’s face and her baby son, whom she holds near her face. He is,  asleep, wearing a striking, white baby gown. Springs does not reduce the  actress to homely motherhood, however: Nielsen’s vigorous facial  expression, glaring at the camera, and athletic arms captivate the  viewer, vividly juxtaposing the dormant baby’s innocence. The Danish  woman is not simply maternal, nor merely powerful.

In Newton’s photographs, nudity and intimacy cannot be equated. Brigitte Nielsen is fully naked, but her portrait does not portray  the person behind the body. Newton’s Nielsen is a perfected woman, but  the symbolism of her body as an aesthetic ideal forecloses a more  realistic representation of a complex emotional interior. Newton’s nudes  do not engage with intimate life worlds; they enhance women by  disguising blemishes and doubts. Newton’s women assert confidence  through nakedness. Alice Springs, by contrast, pursues more realistic  portrayals. Her Nielsen is both majestic and maternal: an independent  woman, yet nurturing another life. Newton excludes much from his nudes;  he creates and fashions women into a particular idea of female  perfection, while Springs’s images are more refined.

Nonetheless, most importantly, Newton and Springs  complete each other, professionally as well as in their private lives  before his sudden death. Her real-life depictions, mysterious through a  complexity that escapes categories, complement his candid penchant for  vigorous women. In Nielsen, Springs convincingly illustrates that the  opposite of female strength is not simply maternity, but rather  strength-cum-maternity. Thus, rather than approaching Newton’s or  Springs’s portraits on their own, they must be seen as complementary  parts of a larger project, an intimate, lifelong commitment to  photography, permitting precisely the joining of his aesthetic  perfection with her more nuanced rendering, beautifully illustrating the  couple’s joint talent.

In the second part of the Berlin exhibition, ‘US’,  hung in an adjacent room, Newton and Springs show their genius for  capturing the intimate. A central photograph shows Helmut Newton lying  in a hospital bed. His neck in a cast following his car accident, we  know that he died shortly after the image was taken. Alice Springs’s  black-and-white photographs of her dying husband hang with portraits he  took during previous hospitalisations, with plasters and heart-rate  counters attached to his torso. These intimate confessions of Newton’s  physical vulnerability dramatically contrast with his photographs of  strong female bodies, testifying to his fascination with power, and  perhaps even exposing a profound longing for a vitality he experienced  humans, including himself, as lacking.

Illness photography can easily become clichéd, but  Springs and Newton do not permit emotionality to substitute truth here.  Their images are full of irony and an almost childlike amazement at the  human body: his mirror self-portrait at Lenox Hill Hospital in New York  City shows Newton nude, from the knees up, with large white plasters and  tubes on his torso; throwing his right arm over his head, he attempts a  sexual pose, which is rendered comical by the medical equipment swaying  around his body.

Portraits of physical frailty are complemented by  images Newton and Springs took of each other in everyday situations:  Helmut on a sun terrace, wearing his wife’s hat and heels, or in a  bathtub; June at the kitchen table, her breasts exposed as she lights a  cigarette. The images, black-and-white and certainly highly constructed,  are arranged to appear as genuine, spontaneous, and tongue-in-cheek:  Newton the cross-dresser, with his white shirt forcing a high contrast  that leaves half of his face invisible under a large hat; Springs in the  kitchen, after a meal, with a crumbled serviette next to her plate, the  background sparsely lit. The impression of improvisation and  authenticity turns the viewer into a close witness to the couple’s  relationship. It is a potent illustration of the persuasive purity of  their photography that seeing Newton’s deathbed feels like an intrusion  into what ought to remain hidden, intimate: her final shared moments  with him.

‘Sex and Landscapes’ has a very different  temperament. The exhibition was first shown in Zürich, in 2001, after  Newton had complained to his agents that no one wanted to see his less  provocative, mundane pieces. Newton’s landscapes are beautiful and  melancholic: large-scale, black-and-white photographs of Mediterranean  bays, Nebraska wilderness, Italian villages. They are dramatic, enticing  depictions of everyday urban and countryside scenery, a wide range of  places seen and travelled by Newton. Photographs of (semi-) nude women –  including celebrities such as Charlotte Rampling – hang among town- and  landscapes. Whilst the mixture of these elements and imageries  certainly feels arbitrary, this is also precisely what creates  interesting breaks and juxtapositions, rendering this exhibition so  compelling. The portraits vary greatly. Rampling, for example, is  fashioned as an autonomous, elegant woman. She perches on a leather  divan, clad in an enormous fur coat, exposing her long legs. Her wild  curls neatly continue where the fur leaves off. But other nameless  models are reduced to close-up shots of genitalia or bondage.

The dramatic skies – achieved through high contrast  in black-and-white, wide-angle shots – and barren landscapes exude a  certain melancholy, a longing for eternity, calm, or peace. An Italian  village procession constitutes the real-life opposite to the mobile,  postmodern, international celebrity jet-set, with its non-committal  fleeting residence in Monaco, Paris, and Los Angeles. In this sense, the  photographs of fields, trains, and town squares reveal a different,  personal yearning of Newton’s. They appear honest: real-life immersion,  wide lands, and intimate small-town existence; impressions from the  photographer’s encounter with the world, which contrast with the  homogeneous, elegant hotel rooms – the non-places, simultaneously  everywhere and nowhere – in which Newton enhances his nudes. The  arrangement could tempt to conclude that Newton, or his gallery owners,  feared that landscapes would not draw crowds unless spiced up with  nudes, when close-up shots of anonymous vulvas are hung adjacent to  panoramic views from Newton’s Paris apartment, overseeing a large park.  But it is precisely through the aforementioned contrast of real-life,  truth-induced melancholy with enhanced or reduced, and thus always  partial and unreal, bodies that ‘Sex and Landscapes’ fascinates.

The two exhibitions thus engage a number of exciting  contrasts: between Newton and Springs, ‘Us’ and ‘Them’, bodily frailty  and physical strength, death and power, the melancholic beauty of real  life and artificial perfection. Newton and Springs approach their  subjects differently, but instead of merely contrasting, they complement  each other. Through this layering and juxtaposing of contrasts, the  exhibition invites us to rethink taken-for-granted oppositions,  including the distinction between real and fake bodies. As depictions of  cosmetically-disfigured, constantly available, infantile, and voiceless  female playthings abound, Newton’s nudes can be approached differently.  Of course, they remain unreal. But Newton’s fantastic and confident  femmes fatales also contrast with alternative unreal imageries of women,  sparking important debates about how (female) sexuality and intimacy  are represented in the societies we live in.

With many thanks to the Helmut Newton Foundation.