Butterflies, mimesis and ‘the double’ 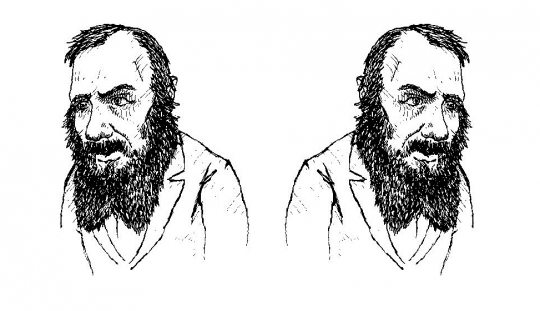 Butterflies are compelled to copy. It’s written into their wings. In mimicry’s most common natural variant, Batesian mimicry,  a harmless species copies the warning signals of a poisonous species  aimed at a predator common to them both. The imitator is known as the mimic, the imitated as the model and the third party predator the dupe. Certain species of butterfly are able to transform themselves into  several different mimetic forms, all guises assumed to ward off (to  dupe) predators: including Heliconius numata, which, thanks to a certain ‘supergene’, has developed seven different possible wing patterns mimicking seven different poisonous species. Mimesis in nature, then, is a means of survival. It’s a way of getting by, of living on.

The OED entry for ‘mimesis’ defines it variously as the ‘[i]mitation of  another person’s words, mannerisms, actions, etc.’, ‘the representation  or imitation of the real world in (a work of) art, literature, etc.’,  and ‘imitative behavior of one species by another’. Its multiple  definitions make mimesis operate on the levels of social play, artistic  representation, and of base or biological drive.

My  impetus for this piece is Richard Ayoade’s recent film ‘The Double’  (2013), co-written with Avi Korim and playfully adapted from  Dostoevsky’s 1864 novella of the same name. It’s a film in which Simon  James (played by Jesse Eisenberg) is a gutless, unfulfilled data input  drone who works in a dismal subterranean office and seems to spend the  rest of his time yearning after his oh-so-kooky colleague and neighbour  Hannah (Mia Wasikowska). One day the persistently ignored and  unacknowledged Simon finds himself face to face with a new colleague who  happens to be his double: James Simon (also Eisenberg). James is  outwardly a perfect copy, is everything that Simon is, but – as is the  case in Dostoevsky’s original – he is also everything that Simon isn’t:  cocksure, loud and brash, he quickly makes a swaggering reputation for  himself both in the office and in bed. He’s proof that the mimic, the  ‘perfect copy’, is a creature formed both of sameness and of  unfathomable difference.

When we write or create art, we are subject to a drive to imitate or  re-present reality in some form. Like butterflies, we’re compelled to  copy. This mimetic impulse is  an urge that re-iterates itself every time we face up to the world and  all its repeated insistence of the ‘not-me’. One of the dreams of  narrative is to grant us escape from the hegemony of the self and the  limits of the personality. The passage into the other, like in  camouflage or Batesian display, can be a refuge; mimicry, again, is an  escape from death. That’s what narratives in their essence are, surely –  a way to exist beyond or outside of myself for a while. Walter Benjamin  argues that the storyteller ‘has borrowed his authority from death’  (from ‘The Storyteller’)  because it is only in the face of death that life becomes  transmissible, narratable. Narratives are a means of survival, a living  through, a living on.

The motif of the double or Doppelgänger  is emblematic for what we might see to be a crisis of mimetic  representation. The figure of the double, the perfect copy, is both  mimetic fulfillment and mimicry gone mad. It’s as if the act of copying  reaches the logical end of its own weird dream and in so doing shudders  into automatism. Roger Caillois, an associate of the French Surrealists, writes in his 1935  essay ‘Mimicry and Legendary Psychasthenia’ (published in the Surrealist  journal Minotaure) that  mimicry and camouflage amongst insects entail a confusion of self with  environment. Insectile camouflage, he argues, all too often proves  itself non-defensive, unsuccessful, or superfluous to need: he calls it  an ‘exaggeration of precautions’. The insect, bodily mimicking its  surroundings, is not merely concerned with survival but is actually  consumed by its environment, as though ‘no longer the origin of the  coordinates, but one point among others’, as though it loses itself in  things. The assimilation into space demands a sacrifice of life; the  living is recuperated by the inanimate. The suggestion is surely that in  mimesis, the world begins to take me over.

In  copying, there are things I leave out. And there are bits of the world  that resist me, or bits that I can’t get down onto paper. Mimetic  representation in art or literature arranges itself through a tacit  shouldering-out of the unsayable, the impossible or the fantastic. And  in so doing, it unwittingly invites a return of these repressed  elements, those elements that speak back, that insist. The world gets back at me. And that’s why the Doppelgänger  is an uncanny figure, and one that is traditionally read as a harbinger  of death: it’s a perfect copy, and a sign of fragmentation and  incompletion, proof of what’s left out, left over. Simon, one of the  modern world’s invisibles – whose office identity card inexplicably  stops working, whose name Hannah can never remember, who manages to  break the lift every time he enters it – exists in a world bent on  forgetting him. ‘It’s like – I’m permanently outside myself… Like – like  you could push your hand straight through me if you wanted to’, he  confides angstily to James. And it is this tenuousness, this porosity of  identity which has come back to haunt him. For the thing about Simon’s  double is that he – a winner, a ruthless game-player – is both a  reminder of how replaceable Simon is and a sign of everything he has  failed to be, all those parts of personality that have escaped him. They  insist, those parts, in the form of James, making their presence poisonously felt.

So  what Ayoade gets with such sweet, comic sensitivity in ‘The Double’ is  the absurd falsity of the modern self: the self which is, just like  narrative, a product of repression and incomplete projection. Talking  about the film, Ayoade expresses his concern for identity’s enthrallment  to the perception of others. ‘If everyone decides you’re not a person,  you aren’t, in a way,’ he puts it in an interview. ‘If everyone decides  they don’t know who you are […] there’s nothing you can do. You will  just stop existing. And to me, that is funny’ (Interview at Toronto  International Film Festival, September 2013). The opening sequence of  the film shows Simon on a train, with alternating shots of his face  partially covered, reflected, or obscured by shadow: shots that return  almost obsessively throughout the film.

A  human face is the visual thumbprint of identity and the screen for  emotional display (where ‘screen’ is both projecting surface and veil or  concealment). One of the most jarring moments in ‘The Double’ is when  the insipid Simon, having lost his job after James’ scheming, finally  loses his temper and lashes out, crying ‘Look at me! Look at him! He stole my face!’  The compulsion to copy is written onto our faces: our expressions are  shifting patterns of mimicry. A face, after all, works only by being faced.  It’s no surprise then that our facial muscles are also known as the  ‘mimetic muscles’. Maybe to ‘steal’ somebody’s face might just be to  copy or reproduce it, an act as innocuous as imitating or returning a  smile. Body language, in this sense, might demand a kind of repeated  stealing or copying of gesture. We read faces by recognising a series of  indices and markers that allow us to know what our interlocutor is  thinking or feeling. We recognise the look of an expression and understand the feel of  it. And so we copy and steal faces from one another all the time. As  humans, as social butterflies, we do it to survive each other. We do it  to get by, to live on.

‘The  Double’ works to remind us that we are incapable of the original or the  authentic, that we are socially mimetic beings, modelling ourselves  through endless shifting copy. ‘The Double’ takes the Doppelgänger  not just as a representation of the otherness inherent in subjectivity,  but as a more apt and timely pointer to the sad artifice of modern  identity, caught up in fear of its own duplicity. Ayoade’s retro  office-space is full of identical desks and faces barely distinguishable  from one another. It self-ironisingly points at the kind of world where  everything you say seems already to have been said, where workplaces,  lovers and plotlines can look and feel so familiar as to be  indistinguishable, and – conversely – where you can watch a re-run on TV  for a second, a third time, with only the faintest sense of déjà vu.  At the heart of the film and the office is the reprographics room, the  office photocopier guarded and run by Hannah. It’s a photocopier  comically always on the blink – we see Hannah sweetly thump it into  action. A photocopier is a duplication machine. And Simon always orders  (much to Hannah’s frustration) ‘just one copy’, but the blinking,  sputtering reproducing machine is suggestive of copy gone mad.  Reproduction these days is uncomfortably easy. And there’s a way in  which the modern Doppelgänger  warns us smirkingly about precisely this, about the double-talk to  which we’re all beholden. There’s a way in which it suggests that we  can’t stop writing, can’t stop talking,  can’t stop producing stuff, or re-talking ourselves into existence, as  if we were all mad photocopiers – because our identities depend on it,  and because if we stop that, as Ayoade points out, ‘you will just stop existing’.

So  what I see in ‘The Double’ is an anxiety about double-talk, and about  the falsity involved in self-modelling as we face up to the world and to  others. It is an anxiety about trope, about the grim understanding that  we are artificial, self-creating and -recreating beings, and about the  necessary acknowledgement that we too are the dupes of others’ mimicry.  Ayoade’s modern Doppelgänger is a figure for our fear of replaceability and duplication: in the workplace, in art, in love, in living.