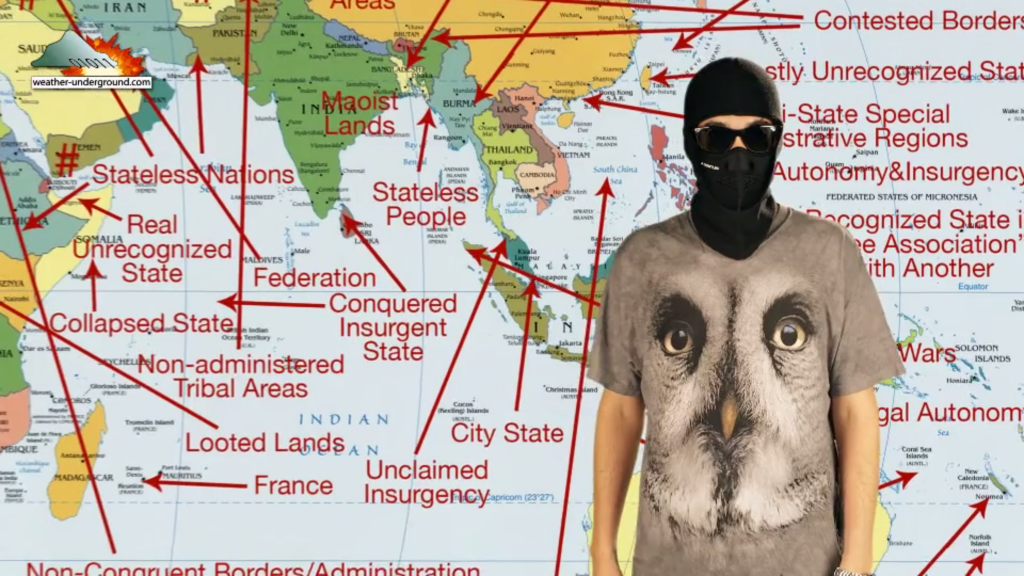 What, if anything, can we learn from contemporary art? Perhaps not much more  than what is already in front of us, a world strange enough as it is. As Jean Baudrillard wrote in 2004:

Nothing now distinguishes [contemporary art] from the  technical, promotional, media, digital operation. There is no  transcendence, no divergence any more, nothing of another scene: merely a  specular play with the contemporary world as it takes place. It is in  this that contemporary art is worthless: between it and the world, there  is a zero-sum equation.

All said and done, perhaps Baudrillard was right. We could think of  contemporary art as a synecdoche for the lifeworld of contemporary  capitalism, a kind of privately funded think-tank that reflects upon a  reactionary present and on speculative futures. In a ‘post-truth’ world,  it seems like contemporary art has returned to an idiosyncratic  realism; one far removed from factual representation, but resulting from  an effort to map the myriad fictions of social, economic and sensory  experience. The following takes a recent video work by the German artist  and essayist Hito Steyerl as a lens through which to understand the  cultural and economic space that contemporary art occupies.

Liquidity Inc. (2014) begins with the sound of crashing waves.  A computer desktop video shows Cinema 4D rendering an expanse of calm  virtual ocean. The voice of Bruce Lee advises us, ‘you must be  shapeless, formless, like water’. The film tells the story of  Jacob Wood, a Korean-born financial adviser whose career began with the  dotcom boom and ended with the Lehman brothers crisis. The same year he  gets laid off, he takes part in his first Mixed Martial Arts fight, and  later, he becomes a ringside pundit. We see Wood getting ready in his  office—he is a calm, ebullient, solidly built; against the oncoming  storm, he is strong, shockproof. A screen behind him displays a  cooly rendered ocean surface as he explains the adaptability of a strong  portfolio, the versatility of mixed martial arts and the hybridity of  Bruce Lee’s fighting style—‘that’s what makes it exciting, that’s what  keeps things liquid, and fluid’.

In Liquidity Inc, Steyerl pulls off something quite  alchemical, weaving multiple fictions together to produce a documentary.  As her eclectic on- and offline narratives co-conspire, they seem to  grasp at the experience of living in a world that is intangibly digital,  virtual yet deadly real. What, after all, does digitality have to do  with climate change or finance capital, and what’s a martial artist  supposed to do about it? The answers are in the water.

The philosopher Michel Serres speaks of how in each historical era,  the world’s “matter” changes phase, taking on a new master-metaphor for  its mode of reality. Steyerl takes water as her patron matter-state,  exploiting it in all its manifestations, flooding the language and  texture of the film with its semantic and physical logic. The polysemy  of water—turbulent, vitalising, slippery—becomes a semantic rhizome  through which Steyerl’s narrative threads knot and furl. Jacob Wood’s  own story, the geographical, biographical and emotional trajectory of  his emigration to the States as a baby during the Vietnam war, and the  movements of his career with the tides of the financial crash, is  diagrammed in the performance of a balaclava-clad weather reporter who  warns us of trade winds ‘blowing people back to their homes […] blowing  their countries back to their assumed origins’.

Referencing the 1970s militant-left group The Weather Underground,  this terrorist-weatherman stands before a flashing tumblr GIF of  Hokusai’s The Great Wave Off Kanagawa, alluding to the torrential  circulations of digital imagery. Wood recalls when times were good in  the 1990s: ‘we thought everything would be internet-based and that we  were entering into a new world’. Meanwhile, the voice of water (in the  form of some undulating bubble-writing) tells us a far longer story of  cosmic, material time: ‘I am not from here […] I run through your veins,  your eyes, your touchscreen and your portfolios…’. Steyerl’s barely  coherent montage of filmed, found and computer footage ties the activity  of water to themes of virtuality, to global migration, to the origins  of life, from the depths of the ocean to the vaporous technological  imaginary of ‘the Cloud’. The film’s (non-)structure becomes a  shapeshifting organism in which subjects, signs, and soundtracks (a  pitch-perfect appearance by Arthur Russell’s Let’s Go Swimming!  as an intermezzo) dissolve sporadically into one another. Sweaty rhythms  of sparring fighters become a metaphor for financial liquidity, the  flows and eddies of their choreography brimming with emergent violence.

In Liquidity Inc., Steyerl playfully maps out the affective  co-ordinates of a rapidly unfurling reality. Evocations of elemental,  geophysical movement and visual reference to fluid dynamics— that is,  the practice of virtually representing and forecasting those  ineffable forces — draw us again and again into topologies of stochastic  systems, including the fluid systems of atoms and bits that constitute  life itself. Like sheets of acetate, she overlays the structures of the  global financial trading, virtual and new technological discourses, the  affective sphere of leisure and labour, semiotic exchange via the  internet, mixed martial arts, and indeed, the science of climatology.  ‘Weather is water with attitude’, the reporter reminds us. The  interconnections of finance and hydrology affect us all: weather is  water plus history. Therein lies also the elemental alignment proposed  by Steyerl’s montage, the corresponding fluidities of water and capital  along the axis of history, each being the material substrate and  lubricant of systemic and experiential flow. Anxiety is in the water  here, not only because of the film’s post-crash moment, but because of  the inherent volatility of all the systems to which it alludes. Finance,  computers, waves—each comes crashing down with a tidal resonance over  the system at large.

The transubstantiation of history into H20 pulls disparate  narrative fragments into the artist’s lexical whorl. As ever, metaphors  are essential: Steyerl evinces the structure of reality and experience  as a confluence of material and immaterial systems. It’s not strictly a  film about the financial markets, new technologies, nor the  post-internet culture, yet its very composition is a patchwork of 3D  renderings, mock economic forecasts and low-budget tumblr aesthetics.  It’s a tangle of visuals in which water is a metaphor for metaphor  itself, giving shape to the mutability of experience, permeating the  metaphysical basis upon which we conventionally think and talk about  reality as such—a ground turned unstable, aqueous. The double-entendre  of ‘Liquidity Inc(orporated)’ draws together not only the cycles of  water and of corporate finance, but also the metaphors of embodiment  that underlie both. The fluid forms that populate the film—from a flood  of memes to transpacific migrations—are all swelling skin-volumes  vulnerable to ruptures within the system: the crashing of finance, the violence of martial arts, the breakdown of communications, the shattering of surface tension…

Reality started to smell a bit funny after 2008, and Liquidity Inc.  feels like a promo video for that newly precarious world. It’s a world  in which digitality has transformed the base of socio-cultural  production as such that the superstructures are barely legible,  operating at scales and temporalities we are still struggling to parse.  In 2008, the artist Marisa Olson wrote an essay called ‘Lost Not Found:  The Circulation of Images in Digital Visual Culture’ in which she coined  the term ‘post-internet’. The slippery phrase is defined by curator  Michael Connor as the situation in which ‘it no longer makes sense for  artists to attempt to come to terms with “internet culture”, because now  “internet culture” is increasingly just “culture”’. In a sense, all  artists are post-internet artists now. Neither the ‘net.art’ of the  1990s nor simply ‘digital art’, the term ends up referring not to a  genre, but an era of cultural production in which the internet’s  combined and uneven global consequences have left nothing untouched. The  artist Artie Vierkant made a helpful list of its constituent phenomena:

a result of the contemporary moment: inherently informed  by ubiquitous authorship, the development of attention as currency, the  collapse of physical space in networked culture, and the infinite  reproducibility and mutability of digital materials.

2008 was also, of course, the year of the financial crash. The world  ruptured a spleen, and neoliberalism, the legitimising official  narrative of the global economic order came toppling down along with all  its forecasts and models. 2008 was the year the iPhone 3G arrived and  the Google Maps app was launched, 6 months after the release of  Streetview. It was the year that Facebook hit 300m users and turned  cash-flow positive for the first time. 2008 might be the year that  signed and sealed the ubiquitously networked era of ‘there’s an app for  that’ in which we of the Global North still live today.

To me, 2008 feels like the year that precarity took hold, on multiple  fronts. An aggregative expression of economic, technological and social  changes in the early 21st century. The world of finance collapsed and  the global operating system of consumerist cyberspace was properly  installed. Matrix-like, our environment started dissolving into  data at an exponential rate, and an untenable dualism between the real  and the virtual was pulled beyond breaking point. As Steyerl’s  weatherman chants, ‘Weather is Time! Weather is Money! Weather is  Water!’. Like one of Timothy Morton’s hyperobjects, weather is the  environmental phenomena we experience but can’t control. Either way the  forecast looked turbulent.

For what it’s worth

What’s it got to do with contemporary art? As the art historian  Julian Stallabrass notes, contemporary art is ‘bound to the economy as  tightly as Ahab to the whale’. The art world is all symptom and no cure —  a coterie of dealers, curators and validating institutions; a  playground for oligarchs and a finishing school for their children.  Meanwhile, the artist class, typically low on cash and high on cultural  capital, is the de facto infantry of urban gentrification in bohemian  garb. If you need a barometer for the cultural landscape of global  capitalism, the art world gives you a fair picture.

At the same time, the best of today’s artists resemble a motley  international forum of professional dilettantes and amateur  philosophers, media functionaries and affect engineers. When it comes to  cultural and technological change, they are early adopters, always  amongst the first to misuse and abuse. While the machinery chugs on,  artists are left trying to work out what it means to see, feel and  filter reality through distorted looking glasses of new media and late  capitalism. This is complicated, of course, by the fact that the latter  forms the conditions of possibility for contemporary art’s continued  existence, promotion and exchange.

Ultimately, we get the art we deserve. Contemporary art is the  perfectly flawed arena in which to comprehend the interlocking systems  of narrative that comprise our understanding of the world.  Over-indulgence, corruption, complexity and sometimes sublimity.  ‘Nothing of another scene’, for sure; frenetic imaginations like  Steyerl’s afford us the empathy, clarity and inspirational respite we  need to contemplate the mess we’re in. That the contortions of reality  should be so deeply complicit with its representation speaks a twisted  kind of truth to the whole situation. As Steyerl herself wrote, artists  are always already ‘in the neoliberal thick of things’. Indeed, in a  late capitalist society, what art could be more appropriate to  Baudrillard’s ‘specular play’ than realism bankrolled by real estate? At  the end of the day, it’s a reflection of the scene we’re in.