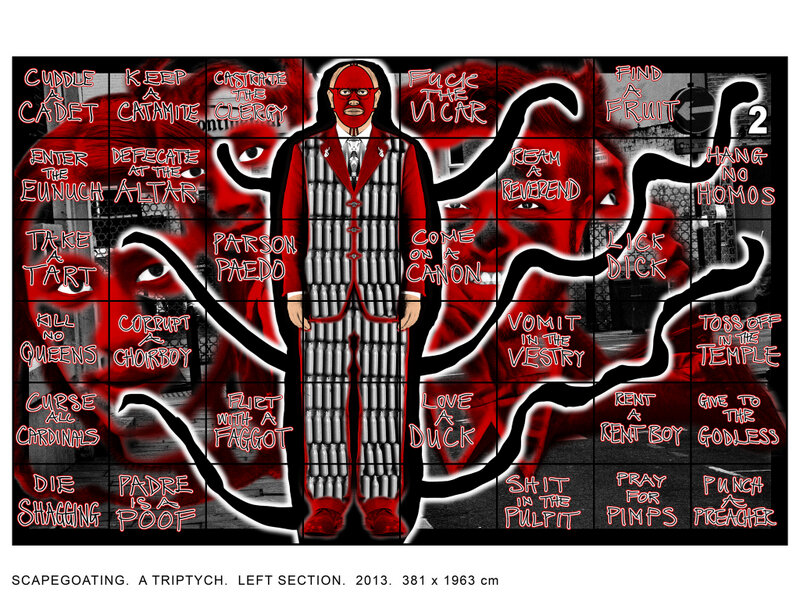 In a 2005 interview, British artists Gilbert &  George acknowledged that they could be considered townscapers, i.e.  inscribed in the artistic tradition of depicting the city.1 In the 2014 video presented together with their new show, Scapegoating Pictures for London,  which runs at the White Cube gallery until the end of September, they  use the word again, more resolutely this time. This new series is based  mostly on a new element: the canister of laughing gas, which they found  during their daily urban peregrinations. It features on the huge  programmatic poster greeting the visitor outside the White Cube Gallery,  containing all the elements of the exhibition: the now classic black  square, here a single one, but in their work the basic element of their  grid structure; the black and red typography; and more specifically  here, a single canister of laughing gas, present in the 63 works shown  inside. A simple, readable visual presence before the viewer has even  entered the sleek space of the gallery. Often criticized by their  detractors for re-hashing the same elements, Gilbert & George’s  imagery has nonetheless evolved over the years: first technically, with  the passage from traditional photographic methods to digital  manipulation, allowing them to clone the subjects of their work,  reproduce them ad libitum, and dismember their own bodies further. And  secondly with the era: each series is based on elements they have  collected in their area, from street names to ads for male prostitution,  and, here, the canisters.

Even more than in their E1 pictures,  which were made exclusively with the names of E1 streets, London as a  space mapped through the pictures is the real object of the show. Text,  as a beautiful recent re-edition of their early work by Enitharmon  Editions shows2,  is of cutting, critical importance in the artists’ work, starting with  the titles. Often encapsulated in a canister, acting as a cartouche3, a postcode, E2, E1, EC2Y, an area, Bethnal Green, a street, Vallance Road, specific houses, n°10, n°33, and more widely street furniture, Post Office Telephone,  are all titles of the works exhibited here. Presented on one of the  walls of the gallery as a simple list, after the viewer has already  entered the first rooms and seen some of the works, they are  intermingled with more intriguing ones, such as Smoking Dildo, Body Poppers, Shebang, Euphoria, referring to pleasure – perhaps the kind felt when under the effects of laughing gas. A third category of titles, such as Islamize, Khilafat, Kota Satay, Ahimsa refers, somewhat controversially, to their Asian neighbours on Brick Lane.

Religion has been a running theme in the artists’ work, which they have denounced both in text and image, through their Sonofagod, Was jesus Heterosexual series (2006), or their Ten Commandments  (1995), reproduced too on the bare white wall of the White Cube. They  usually focus on Catholicism through the desacralisation of crucifixes,  or here, in their eponymous triptych Scapegoating, through  playful associations of an imperative and its direct object. They seem  to have sat down and written as many offensive and sexually connoted  words as possible, and matched them with a religious entity starting by  the same letter or sonority: ‘vomit in the vestry’, ‘castrate the  clergy’, but also opposite ones, enticing the audience to ‘kiss a queer’  and ’defend our decadents’. The poetics of these slogans is based on  alliteration and provocation, not on discrimination.

Gilbert & George’s body of works, their own  bodies, and their E1 perimeter function as a palimpsest. The  superimposition of layers of meaning, completing or replacing previous  ones, works on many levels. It is visible through their constantly  evolving technique and their practice of self-quotation: many texts of  the walls of the White Cube have been written decades earlier, published  and re-published in different volumes; the video accompanying the  exhibition was shot in 1986, and still has currency. The urban space  which forms the basis of their artistic practice is also constantly  evolving. In the artists’ own street, one building successively served  as a church for French protestant refugees, a chapel for Methodists, an  ultra-orthodox synagogue, and, in the 1970s, a mosque.4 It is in this area, in 2005, that they picked up a flyer advocating for sharia law, prompting the Scapegoating series.

Britishness, or even Englishness, is a concept which  still needs exposing and defining, as is attempted in academic works  such as Linda Colley’s Britons: forging the nation (1707-1837), 1992; Peter Mandler’s The English National Character, The History of an idea from Edmund Burke to Tony Blair,  2006, or in a more playful, controversial way. It is what Gilbert &  George do, through charting the evolution of their area. Here some very  British symbols, the Queen and her husband in HM & HRH,  cabs, horses, double deckers, Union Jacks are used, seemingly as  examples of mummified Britishness, and set next to, not against,  burqa-clad women and pamphlets calling for the Islamic state in Britain.  The canister also doubles up as a bomb, which, according to the  artists, is also part of the history of the East End, during WW2, and  under attacks led by the IRA, white supremacists, and more recently,  7/7. The ageing artists, whimsically dismembered and omnipresent, and at  the same time fading away, insist on the different layers of history  which they unravel through their exploration, and which is at work on  their doorstep. The importance of grounding their work historically and  culturally is manifest in their comparison of their work to Hogarth’s  Gin Lane (1761), in the reference to Joseph Priestley, an 18th  century theologian and scientist who discovered the proprieties of  nitrous oxide – laughing gas – or to the Khilafat Movement (1919-1924), a  pan-Islamic movement to protect the integrity of Islam in British  India.

There remains one interrogation, one that bears on  the subject and the object of the gerund ‘scapegoating’. The title of  these new series can be read in several ways, the pictures being in turn  the subject or the object of the action, but each time missing an  element to be able to grasp it fully. ‘We don’t want to preach, we only  want to show’, claimed Gilbert & George in the 2005 interview.  ‘There’s no picture we made that advises any particular thing,’ they  continued. As ever with the artists, one must be cautious of each word  uttered, which has been carefully planned beforehand and participates in  their Living Sculpture performance.5.  It is difficult to believe them when they call these new works  ‘automatic pictures’, when one knows of the various processes at work  behind each picture, from the collection of the material in the street,  the digital manipulation of the images, the various processes of  collage, and the care put to the display of the work, planned in advance  on a scale model of the specific gallery for which it is intended.

Here, London is inscribed in the full title and the  elements of each work are easily decipherable for the British viewer;  the remaining 61 works, part of the same series but an utterly different  set entitled Scapegoating Pictures for Paris, will be exhibited  in September at the Galerie Thaddaeus Ropac. The 125 pictures will  coincide for a couple of weeks, both in London and in Paris. The  problematic of their readability and their reception will change  completely. How will these other pictures differ from the first set, and  what will a French audience understand? In a country which recently  legislated to ban the burqa in public places, they might take on another  meaning. Isn’t this precisely the function of their art: scratching the  surface of conventional respectability? ‘Thou shalt be the messenger of  freedoms’, reads one of Gilbert & George’s Ten commandments.

3 A Visual And Literal Pun: A ‘cartouche’ In French Is Both The Container For Gas Or Powder, And The Space Framing An Inscription.

5 Theorised At Length, The Living Sculpture Concept Started When They Met  In 1967 At The Central St Martins School Of Art And Design. It Is The  Name They Have Given To Their Work As A Couple, Which Is Not Limited To  The Tangible Pieces They Produce, But Encompasses Their Garments, Their  Gait, The Statements They Make, And Their Whole Being.