The dazzling, dangerous charm of Dwayne ‘The Rock’ Johnson 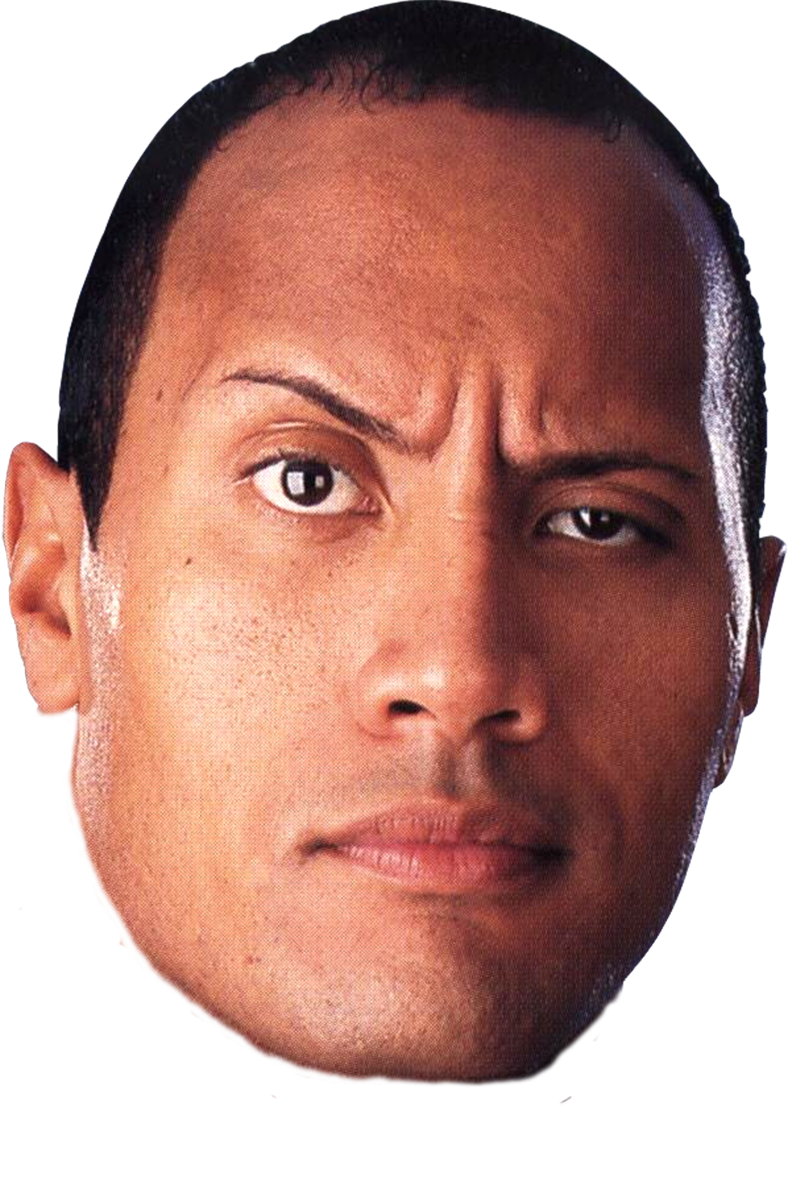 Dwayne “The Rock” Johnson is the  eighth most popular individual on Instagram. He posts mainly photos of  himself working out at the gym, or promotional material relating to his  latest movies. His photos invariably appear alongside comments that  could be distilled to aphoristic life advice, albeit advice that tends  to centre around first-person pronouns (“I make my cheat meals EPIC  because, hell we all work hard and only live once”, he writes next to a  picture of an enormous plate of brownies) He is also an undeniably  likeable presence, managing that rare balance of raw physical bulk and  perennially-smiling sensitivity that only his Fast and the Furious co-star Vin Diesel can rival.

Johnson rose to fame in the world of  WWE (née WWF), or “World Wrestling Entertainment”, grappling under the  assumed named “Flex Kavana” and “Rocky Maivia”, before settling on the  pithy “The Rock”. He is of Samoan descent, and the son and grandson of  two other pro wrestlers, Rocky Johnson and Peter “High Chief” Maivia —  hence his own early nicknames. As the first ‘third generation’ wrestler,  as the WWE billed him, he rapidly grew in popularity and stole the  championship belt from then-reigning champion “Stone Cold” Steve Austin.  Fame in the wrestling world led to fame in the world at large, and,  after some brief television cameos in the guise of a wrestler (That 70s Show, Star Trek: Voyager),  Johnson has been making his money, and establishing his public  reputation, primarily as an actor. It has been Hollywood that sent him  to the top of the Instagram influencer tree. Now, on an annual basis, he  makes it into the top twenty in the Forbes list of the world’s most  powerful individuals. Forbes puts his net worth at $65 million; he was  the highest paid actor in the world in 2016.

How did this happen? It may be that  he has the world’s best agent. Johnson received a record $5.5 million  for his first starring film role in 2002’s The Scorpion King, in which he reprised his role of the titular ‘Scorpion King’ after appearing in The Mummy Returns with Brendan Fraser. Despite an average rating of 41% on Rotten Tomatoes, and in spite of the fact that his character is famed for providing some of the worst CGI in film history, The Scorpion King  took $33 million on its opening weekend. His career is full of  similarly successful and wildly inadvisable moves. Only a year before The Scorpion King, Johnson recorded, with has-been rapper Slick Rick, the single “Pie” for WWF the Music, Vol. 5;  it is a completely bizarre and proudly offensive song about eating the  “pie” offered him by various women in Daisy Duke shorts, featuring lines  like the following:


“The Rock said ‘thanks ladies’, and more kind words. / Grandmother said, ‘Be polite, eat mine first’.

“it tasted so good, Rock was talkin’ Chinese! That good pie!”

“’Cause you know after The Rock lays the smackdown on some big, fat, ugly hermaphrodite!”

More successful was 2000’s “It Doesn’t Matter” with Wyclef Jean, which  managed to hit number 3 in the U.K singles charts, and  which saw “The  Rock” critique Jean’s high-consumerist boasts (“I’ve got a pocket full  of cheese and a garden full of trees” / “It doesn’t matter!”). Notably,  though, next to none of Johnson’s post-Mummy films has been received by critics with any other than tepidity. The starring role in video-game adaptation Doom? That Baywatch reboot with Zac Efron? The title role in 2010’s The Tooth Fairy? Only the Fast and the Furious  series, which he joined at instalment five, has stood out to critics  and audiences alike, presumably because of their intense depictions of  male-on-male erotic tension, played out through the metaphor of  competing V8 engines.

Stare as long as you like at the individual steps in The Rock’s  meteoric rise, you will not be able to point to the moment where he  broke from gravity to become the world’s highest paid actor. His  popularity does not quite make sense, nor does it tally. Can we really  chalk up his success to his personality alone, and his mutual appeal to  mums and motor-enthusiasts alike?

There is something eerily  reminiscent, in Johnson’s career, of the rise of that other stalwart of  wrestling culture, Donald Trump. It is true that both have their names  in the WWE Hall of Fame — Johnson for his wrestling, Trump for hosting  matches and for helping Rock’s rival Steve Austin to shave the head of the WWE CEO,  Vince McMahon. But on a different level, the structure of the ascent  shared by both men is a markedly twenty-first century phenomenon — a  kind of democracy-by-entertainment-industry. Both are the progeny of  successful men within their fields (Rocky Johnson, Fred Trump), and both  sought to continue the family businesses. Both wrote unexpectedly  successful books — The Rock Says was a New York Times number one bestseller, and remains the bestselling wrestling book of all time; The Art of the Deal  did the same for Trump and for business books. From these foundations,  both have used raw personality to win the public’s affection, and thus  to work their way through the democratic structures of American society.  For the current president, winning the electoral college was only the  last step in this process. And Johnson, like everyone else at the top of  the Instagram ladder, is, in a crucial sense, there because we voted  for him. We are all complicit in the popularity of the impossibly  popular few, and we all contribute to their impossible wealth — be that  directly, when we buy their products, indirectly, when we view their  social media posts that promote other people’s products, or in general,  when we accept them as a brand. Once a certain level of popularity is  attained, there’s no real way to take it back. There’s no thumbs-down on  Instagram, no broken heart on Twitter, and the followers only go up.

Dwayne Johnson is a likeable  human being, but the fact that his general success is so wildly out of  proportion to the quality of any franchise he has appeared in makes him a  likeably unlikely warning about populism. “The Rock” was, after all,  the wrestler who rose up the ranks by pushing the personal brand of “the  People’s Champion”. An agent of the people, for the people, dressed in  spandex briefs. His signature move was “the People’s Elbow” — a routine  that involved showboating over the mock-unconscious body of his foe, a  sprightly skip or two over their body as he bounced from rope to rope in  the ring, and a final, emphatic fall, elbow first, on to the unlucky  loser’s chest. Knock out, match over.

This is democracy in action, this is  what we have voted for — if not through actual votes, then through  cheers and jeers at a wrestling match, through social media assent,  through the passive consumption of an individual-turned-brand.  The  appropriate neoliberal structures are all in place to facilitate this  process of democratic success via passively consumed entertainment:  simply click on Logan Paul’s hideous and moronic video of a suicide victim, and Logan Paul has already made money. Instagram is monetized less directly than other channels, but it is monetized  — heavily. “The Rock” is popular because he is a nice man, and also in  some part because of sole ironic appeal to the fact that he makes bad  films. But does that mean he deserves the power he has received? We are  voting to line the pockets of the top Instagrammers, or society’s  mega-rich, or mega-powerful; we feel, on a broad social level, that they  have deserved the obscenity of their opulent lifestyles, and we are  complicit in it. “The People’s Champions.” In 1837, the Russian  anarchist Mikhail Bakunin wrote, with populism in mind, that “when  people are being beaten with a stick, they are not much happier if it is  called ‘the People’s Stick’”. And yet: they are a bit happier.