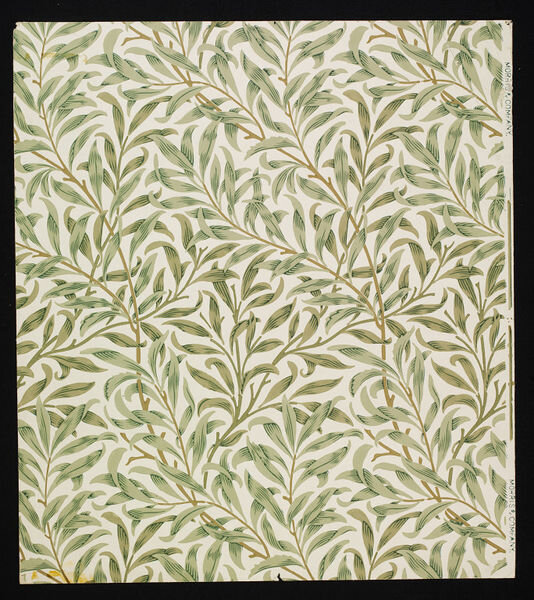 On a tour of William Morris’s Red House,  in the London suburb of Bexleyheath, our National Trust guide asked us  what we thought Morris was best remembered for today. “Wallpaper!’ the  group of fifteen chirped in unison. “Socialism,” one solitary voice  returned.

Wallpaper and Socialism nicely summarise Morris’s image in the  twenty-first century. In England, Morris is inescapable. In London, his  designs are used on Daunt Bookshop’s shelving. They cover much of the merchandise  in the Victoria & Albert Museum shop. Liberty of London stocks  upholstery, wallpaper and rugs made to his designs, as they did 120  years ago. Morris books and souvenirs are sold at nearly every major and  many a minor British museum and gallery. Perhaps most tellingly,  pencils, mugs and umbrellas with pirated Morris designs on them can now  be found on the souvenir knock-off market.

As a figure of historical importance, Morris has recently been added  to the curriculum of British primary school eduction. The William Morris  Societies in the UK and USA  coordinate public events, preservation initiatives, publications,  exhibitions and festivals that celebrate, remember and reflect on Morris  and his life.

I can think of few other artists with such an immense, or invested  and active, contemporary public following. Morris is poster boy both for  the Arts and Crafts Movement that he popularised and for the history of  British design and craft more widely. His striking curly mane, bearded  profile and naturalist designs are identifiable to many, if not most, of  the British public today – to say nothing of his international  following.

This image of Morris was employed by Jeremy Deller in his exhibition English Magic, first shown in the British Pavilion of the Venice Biennale in 2013 and now touring the UK.

Deller, an installation, video and conceptual artist, sees himself as  a conjurer rather than a creator. In English Magic, he brought together  numerous works that referenced English heroism, folklore and politics.  The iteration of the exhibition at the Bristol Museum and Art Gallery,  which I saw, included a video projection of owls flying and swooping on  prey in mesmerising slow motion, taxidermy, portraits from David  Bowie’s Ziggy Stardust tour contrasted against contemporaneous images of  the 1984 Workers’ Strike, immense compacted Range Rovers and a series  of drawings by British ex-soldier prisoners, from Iraq and Afghanistan.

The exhibition culminated in a mural of William Morris, made  colossal, lifting a luxury yacht above his head, poised ready to throw  it into Venice’s lagoon. The work, entitled We sit starving amidst our  gold, references the docking of Roman Abramovich’s £115m, 377ft super-yacht  beside the Giardini at the 2011 Venice Art Biennale. The yacht, which  blocked the views over St Marks Basin, was despised and ridiculed by  tourists and locals. Exploring the relationship between Morris and  Abramovich further, Deller hung on the walls surrounding the mural  framed examples of Morris’s nineteenth-century hand printed Socialist  pamphlets and privatisation coupons dating to the fall of the Soviet  Union, which resulted in the mega wealth of today’s Russian oligarchs,  Abramovich amongst them. Deller said of his hero in an interview:

Well,  Morris came to Venice, and loved aspects of it, and he was apparently a  great chucker around of things. I had the sense this yacht and its  connection to the art world was the kind of thing that would have pissed  him off. So I kind of summoned him up.

Ascribing upon Morris the status of an English hero is not new. In 1959 the historian E. P. Thompson wrote:

Morris was one of our greatest men, because he was a great  revolutionary; a profoundly cultured and human revolutionary… Moreover,  he was a man working for practical revolution. It was this which brings  the whole man together. It is this which will make his reputation grow  as the years advance.

Thompson’s biography, William Morris: Romantic to Revolutionary,  established the popular understanding of Morris’ Socialist activities  as an extension of his artistic and philosophical Romanticism.  Subsequent biographers, and there have been many, have written their own  Morris’s into being, but the thread of a hero runs through them all.

Morris was, however, a complex and anachronistic figure in the  nineteenth century. I would be so bold as to argue that Morris was not a  Victorian. He lived all but his first four years under the rule of  Queen Victoria, but he hated the society that her reign produced. Morris  disdained the trappings and greed of commercialism; he opposed fine art  and its capitalist core, espousing instead the value of ‘useful art’.  His review of the Royal Academy’s 1884 summer show found it deficient in  the principles he believed essential to art. His criticism of the ‘art for art’s sake’ mantra of the Aesthetic Movement was widely known. His vocal opposition of Prime Minister Disraeli’s action on the Eastern Question even saw him criticise the foundation of the Victorian age: Empire.

Morris looked to history as an antidote to the Victorian belief in  progress. He believed Victorian society to be oppressively ugly,  aesthetically and morally, and he used history to produce ‘useful art’  (including poetry and literature) that was purposefully anti-modern.  Morris looked to ancient history and English folklore as his guide and  muse. Morris saw classism, the backbone of Victorian society, as a  greater inequality than poverty, and he founded the Socialist League in  1884 in response. Aligning himself with the working class man, he  embarked on a series of speeches across the United Kingdom.

Meanwhile, however, Morris was operating a successful commercial  business. Morris & Co., begun as an artist’s cooperative of six in  1861, employed over 100 people by 1880. The initial ‘Firm’ (as its  founders affectionately referred to it) hoped to reinstate decoration as  a fine art and practice a policy of affordability and anti-elitism. By  1881, the business had expanded to the point that Morris was able to  lease a seven-acre former silk weaving factory, Merton Abbey Mills, in  Southwest London. Whilst working conditions at the Abbey were better  than in many Victorian factories, Morris found his Socialist ideals and  financial success opposed one another, and the majority of his employees  worked on a piecework basis whilst the owners of the Company profited.

Well over a century has now passed since Morris’s death and it has  become easier to categorise his legacy. He is a gentle revolutionary, a  humanist, a Socialist and Marxist unsullied by the horrors later  committed under the banner of Communism. His image and legacy, wrapped  in tapestries and wallpapers, securely keep him in the nineteenth  century where, thanks to historical distance, he is easier to  understand, to hang on our walls and remember as an industrious,  well-intentioned and practical worker, artisan and craftsman who fought  for the rights of his fellow man.

It is this view of Morris, found in today’s gift shops, that Deller’s  work does much to challenge. The work forces the viewer to consider  Morris’s more complex biography and legacy. Initially, we see Morris as  the hero, as his popular biography promotes, lifting Abramovich’s luxury  yacht above his head, ready to throw it into the sea, saving the art  world for the common man. Then we are encouraged to make our own free  artworks; large rubber stamps, ink pads and paper are provided, enabling  the viewer (now an active participant) to reproduce the image – an  obvious reference to Morris’s block printed designs and belief that the  ‘useful arts’ can and should be practised by all. But we are also forced  to see Abramovich’s wealth and understand its creation as the  consequence of Russia’s Communist past. Here Morris and Abramovich  become uncomfortable bedfellows, as Morris’s pamphlets and the coupons  that secured Abramovich’s fortune hang together in the room. The former  becomes an idealistic campaigner for Marx’s ideals, the latter one of  Communism’s ugly twenty-first century profiteers.

Morris’s biography shows a man of two halves in opposition to each  other: an anti-Capitalist reformer and a businessman. Historians have  tried to reconcile these halves, but as Deller’s ‘We sit starving amidst  our gold’ tells us, a person’s life is not easily reconcilable, and it  is in the ambiguity between intent and action, or belief and practice,  that meaning can be found.

Cunningly, it is in the gallery shop, as we leave the exhibition,  that we can choose to become consumers of Deller’s Morris. Catalogues,  postcards and even a miniature version of Deller’s Morris rubber stamp  are all for sale. Do we want to buy Deller’s image of Morris? Can we  reconcile that Morris was a Socialist hero with a commercial agenda? And  that profit is still being spun off this contradiction today?