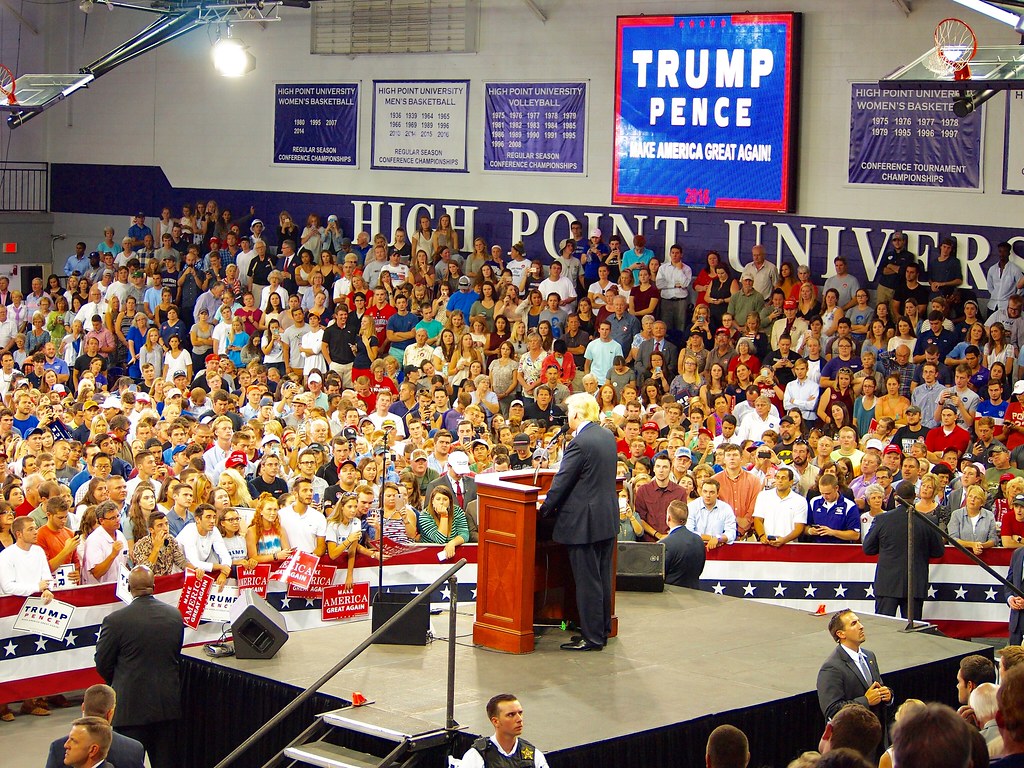 It is strange that Donald Trump, who had so few problems in getting the attention of the media during his successful campaign, received relatively little attention when he released his campaign book ‘Crippled America: How to Make America Great Again’.  There was a smattering of initial reviews in the mainstream press, and  one or two headline-grabbing moments during his brief book tour (The Daily Beast reports that Trump’s campaign spent $55,000 of donated money to buy copies of his own book,  for instance). But given that campaign books exist, at least in theory,  to outline a candidate’s policies ahead of an election — and given that  books like Obama’s ‘The Audacity of Hope’ have played such important roles in recent election history — it is surprising how infrequently ‘Crippled America’  has been consulted. Well, now its author is the president-elect of the  United States. Given that this is proving to be a hard fact to swallow,  it now seems prudent to take a moment to try to understand the man who  won the election, and to look to ‘Crippled America’ for some answers.

It should first be noted that there is a very good chance that the  book was at least in part ghostwritten. Notoriously, Trump has had  issues with ghostwriters in the past, ones that have exposed the process  by which his books were composed. The credited co-author of ‘The Art of the Deal’, Tony Schwartz, was interviewed in the New Yorker during Trump’s 2016 campaign, and was happy to suggest a retitling for that work: “The Sociopath”. But whether or not ‘Crippled America’  was penned by Trump (he claims it was drafted in the backs of cars  whilst on the campaign trail), it is fair to assume it stands as an  authorized representation of his policies. With that in mind, let’s  begin.

It’s not usually fair to judge a book by its cover, but Trump’s  opening sentences set the precedent in this case: “Some readers may be  wondering why the picture we used on the cover of this book is so angry  and mean looking”. That is one source of wonder — another is the  inclusion of five stars below the title, which look like they belong to a review, but in fact do not:

The word ‘crippled’ in the title is also astonishing, in an age when most people are sensitive to ableism in language, though it rather  neatly foreshadows a book that will gleefully flout “political  correctness”. At any rate, Trump tells us why the cover photo is so  mean: “In this book we’re talking about Crippled America. Unfortunately  there’s very little that’s nice about it”. A serious subject, a serious  face. It’s easy to deride this simplistic attitude, but these two  sentences are, in fact, sublimely worked — they reveal the spectre of a  ghostwriter trying to wriggle free. ‘It’ in those sentences appears to  refer to a ‘Crippled America’ — but ‘it’ can also refer to ‘this book’.  “There’s very little that’s nice about this book”. Add to this the fact  that ‘nice’ can mean simply positive or pleasure-giving, but it has  another meaning, as in ‘nicety’: subtle, slight, sophisticated, refined.  Imagine this as the ghostwriter writing in code, on page one: “there’s  very little that is subtle or sophisticated about this book.”

In truth, there is very little that is. The book builds on the success of ‘The Art of the Deal’  by painting Trump as the businessman who will get the best deal for  America. He is the winner who will stand as champion for all (legal)  U.S. citizens. In a bewilderingly long set of appendices, Trump’s  various achievements are exhaustively listed: his many, many properties  (all with names beginning ‘Trump’), his induction into the WWE  (wrestling!) hall of fame, the aircrafts he personally owns. The book is  by and large a relentless bombardment of the idea that wealth equates  with success, and that business success makes you an all-round winner.  This is why so many of the outlined policies fall into the language of  ‘the deal’. Foreign policy: Obama was a “loser”, but Trump will get the  best deals (“If we’re going to continue to be the policemen of the  world, we ought to be paid for it”). Education: privatise schools,  stimulate competition between them, let consumers get the best deal.  Healthcare: ditto. The rhetoric and the actual outlines of policy in  this book adhere almost entirely to the image of the Trump who will run  America as he runs his businesses (or as he claims to).

Given Trump’s propensity to draw hard and fast distinctions between  winners and losers, and his dislike of politicians “talking about what  they’re going to do, rather than them getting things done”, his proposal  to build an actual, physical, concrete wall between the U.S. and its  southern neighbor makes a perverse sort of sense. It is equally perverse  that Trump, who spends plenty of time worrying about the threat of  China in this book (his only compliment: “the Chinese are very savvy  businesspeople”), turns to the example of China for his wall. “Beginning  more than 2,000 years ago the Chinese built a wall that eventually  stretched almost 13,000 miles that could never be breached”. It’s worth  noting that most of the Great Wall that exists today took well over 200  years to build, was largely built by slaves, and has been many times  breached by invaders.

Trump’s chapter on the wall is entitled “Immigration: Good Walls Make  Good Neighbors”. (If this is a knowing allusion to Robert Frost’s poem ‘Mending Wall’  then it is an ironic one; as Frost’s narrator observes, “Something  there is that doesn’t love a wall”.) “I love immigration”, writes Trump,  “What I don’t love is the concept of illegal immigration”. This might  show a fair respect for the law, but it does require Trump to clarify  his position on Mexican citizens: “People who know me know I would never  insult Hispanics or any other group of people. I’ve done business with  many Hispanics”. If ‘doing business’ sounds like a compliment, it is a  backhanded one — ‘business’ for Trump is always doing ‘deals’, and  ‘deals’ exist to separate winners from losers (see Chapter 9, ‘Nice Guys  Can Finish First’).

Trump’s wall serves as a fitting metaphor for the divisive and aggressive politics found in ‘Crippled America’. Whereas Obama in ‘The Audacity of Hope’ campaigned  on the premise that “at the core of the American experience are a set  of ideals that continue to stir our collective conscience; a common set  of values that bind us together despite our differences; a running  thread of hope that makes our improbable experiment in democracy work”,  Trump, time and again, proposes the construction of Neoliberal walls of  competition as the solution to America’s problems: pit school versus  school, healthcare provider versus healthcare provide, America versus  China / Iran / Russia / Europe / the rest of the world. This might be  the real ‘Art of the Deal’ for Trump; stimulate competition by driving a  wedge between yourself and everyone else in your society. Divide,  conquer. Get the best deal. Win.

One of the few areas of overlap between ‘Crippled American’ and Obama’s ‘The Audacity of Hope’  lies in the sense that both men think that they are (or were) coming at  politics from the outside. Both think Washington is stagnating (“drain  the swamp”), and that real change needs to be swiftly administered.  Trump writes that the mainstream media and politicians, despite all  their questioning, fail to “get to the heart of what is wrong with out  country and what really matters to Americans”. For Obama, “we sense —  correctly — that the nation’s most significant challenges are being  ignored, and that if we don’t change course soon, we may be the first  generation in a very long time that leaves behind a weaker and more  fractured America than the one that we inherited”. It is unclear that  Trump does address what is really wrong with the U.S. in his book. Where  is discussion of the America plagued by police killings? Where is  discussion of what David Runciman, writing for the London Review of Books,  has recently called “the violence of a prison system that incarcerates  and disenfranchises significant segments of the adult population,  especially young African-American men”? Trump, toeing the line of  mainstream American politics for once, seems happy to keep these  important points off the agenda.

The closest Trump gets to a definition of the maxim ‘Make America  Great Again’ is when he states that “[t]he idea of American Greatness,  of our country as the leader of the free and unfree world, has  vanished”. There’s no specificity as to when this was precisely — which  is what makes it so brilliant. It can mean anything to any  disenfranchised member of American society. Trump does give some  pointers though: “the big problem this country has is being politically  correct”. Certainly, some of the fallout we’ve seen since the election  — racist and abusive letters shoved in the mailboxes of minorities,  grown men in suits performing Nazi salutes at public rallies — suggests  that there are others, like him, who believe American ‘greatness’  predates the rise of political correctness. The fabled age when America  was a winner.

At the bottom of everything, ‘Crippled America’ delivers what its rhetoric promised: it is, first and foremost, a business book. It is in the mould of Napoleon Hill’s ‘Think and Grow Rich’ or Zig Ziglar’s ‘Born to Win’;  it holds the promise that the reader, too, can be a winner. It  translates the language of those books onto a national scale, country  against country, in which America must once again learn to be a success.  (Note that Trump’s appointments of Betsy DeVos as Education Secretary  and Tom Price as Health Secretary, both preachers of the gospel of  competition, suggest that he is living up to the standard of ‘Crippled America’  so far.) In this context, the extreme scapegoating of immigrants and  minorities makes sense — they’re taking your jobs, they’re unfairly  coming between you as you are now, and the winner you could become. Hold  the world at arm’s length, Trump says; secure the borders, strengthen  the military, and then America will get the respect it needs to get the  best deal. This might be the political equivalent of a sharp suit and an  overly firm handshake, but it’s clearly a dangerous line of thinking.

The rhetoric of this book is both tired and tiring in equal measure.  But it is now the rhetoric of the president-elect, and it demands  attention. ‘Crippled America’ is an illustration of the asymmetry  between the truly free markets of Neoliberalism and the fundamentals of  democracy, and between radical individualism and a healthy society. If  the role model and exemplar is now Donald Trump, a man who gets the best  deal to the detriment of everyone else, who calls his own ability to  exploit tax loopholes “very smart”, and who inappropriately grabs women  first and asks questions later, we get a bleak picture of a society with  more losers than winners. And, as Trump writes, “I’m not bragging when I  say that I’m a winner”.