Gradually moving back in time with him. A review of An Attic Full Of Trains 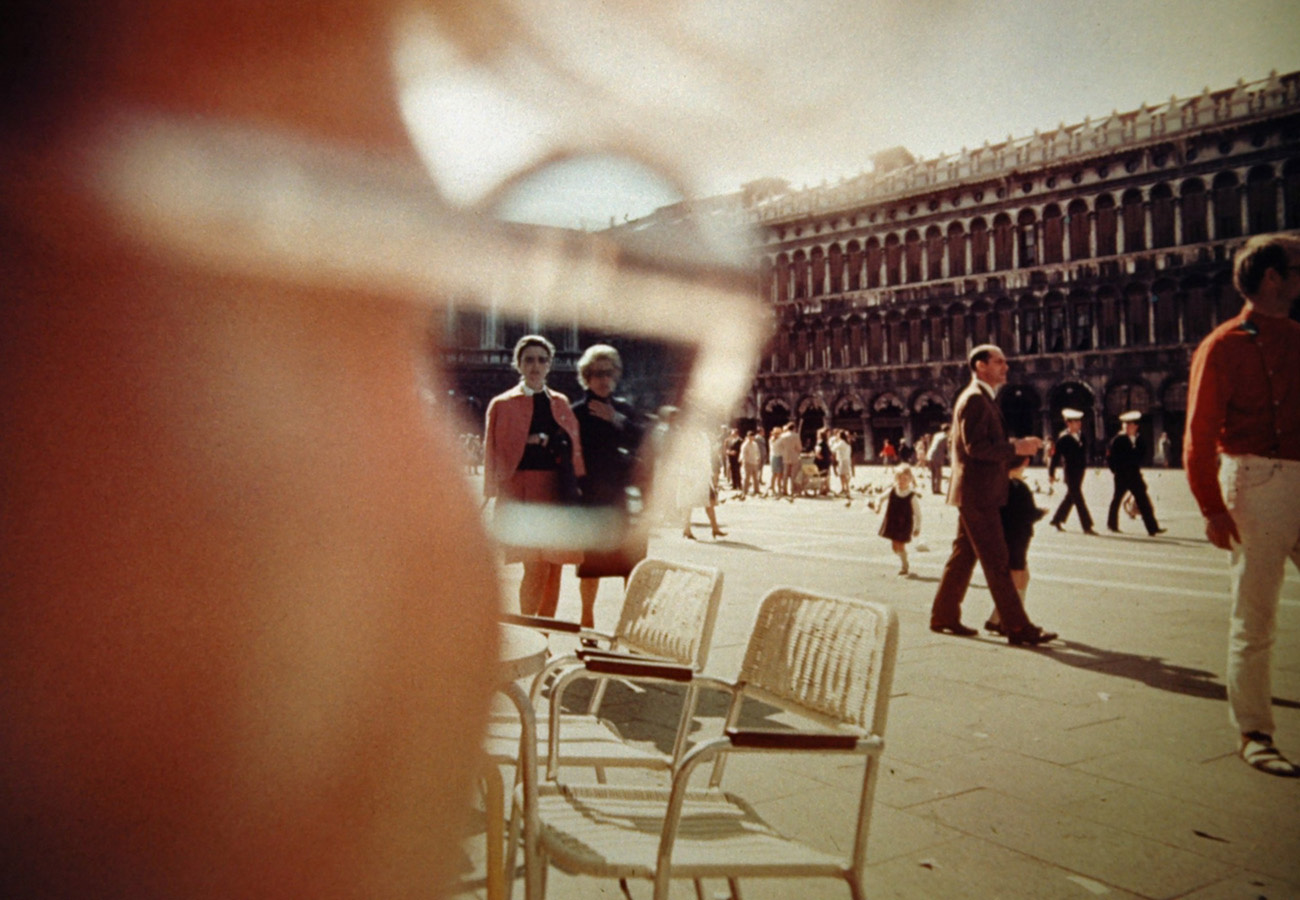 Last month saw the publication of An Attic Full of Trains, the first photobook dedicated to the playful, colour film photographs that the amateur Italian photographer Alberto di Lenardo (1930–2018) took on holidays during the second half of the twentieth century. Nevertheless, critics have already compared di Lenardo’s work to that of the pioneering Italian photographers Luigi Ghirri (1943–92) and Guido Guidi (1947–), and the ‘discovery’ of his archive to that of the American street photographer Vivian Maier (1926–2006) in 2007.

There is, however, an important distinction to be made between the circumstances in which Maier’s and di Lenardo’s archives were discovered. Whereas the former’s archive was posthumously discovered by the Chicagoan collector John Maloof, the latter’s was ‘discovered’ by his granddaughter Carlotta di Lenardo during his lifetime. The title An Attic Full of Trains refers to the attic of di Lenardo’s house in Udine, which housed both his archive and the gigantic model railway which he built and expanded over many years. An Attic Full of Trains was edited by Carlotta, who writes in the preface that, although she played in the attic with the model railway throughout her childhood, she only found out about her grandfather’s archive when she was sixteen years old when he casually mentioned it to her at a family lunch. From that moment onwards, photography became a joint passion for grandfather and granddaughter, and his archive became a shared secret which brought them even closer together. Carlotta spent five years sifting through di Lenardo’s archive of more than 8,000 photographs, trying to select 150 or so for publication. When the elderly photographer became sick, she put together a first draft just in time for him to see it in hospital before he passed away. For Carlotta, then, editing An Attic Full of Trains was an act of mourning – a means of coming to terms with the loss of her grandfather. She recalls in the preface how he ‘would get excited while sharing [his photographs] with me, drawing on his incredibly detailed memory.’ Di Lenardo’s voice is palpably absent from the finished book, in which his photographs are not given titles, dates, or any other contextual information; like his granddaughter, the reader is left wishing that he was still here to illuminate them.

In the most famous passage of Camera Lucida (1980), Roland Barthes (1915–80) describes leafing through family albums containing photographs of his recently deceased mother Henriette, ‘gradually moving back in time with her, looking for the truth of the face I had loved.’ He eventually comes across the so-called Winter Garden photograph that was taken of his mother and her brother at their childhood home when she was five years old. In this photograph, Barthes finds ‘the truth’ of her face – ‘the kindness which had formed her being immediately and forever.’ Whereas Barthes locates his mother’s kindness in a photograph taken of her, Carlotta locates her grandfather’s character in the photographs that he took. She writes in the preface to An Attic Full of Trains that:

[Photography] was his way of communicating his feelings, allowing him to reveal emotions which in his generation should not be expressed in words. His images faithfully reflect his inner serenity, a state he had always tried to pass on to us, but at the same time they manifest his constant search for stolen images – he preferred his subjects to be unaware of his camera, so that they were unguarded and a pure reflection of the moment.

Barthes chose not to reproduce the Winter Garden photograph in Camera Lucida because he feared that, for the reader, ‘it would be nothing but an indifferent picture, one of the thousand manifestations of the “ordinary” […] at most it would interest your studium: period, clothes, photogeny.’ Whereas Barthes’s grief drove him to sequester photographs of his mother, Carlotta’s grief drove her to publish her grandfather’s photographs – to claim on his behalf the recognition that he was too modest to claim for himself during his lifetime.. An Attic Full of Trains is a tribute to both di Lenardo the man and di Lenardo the photographer and, in the preface, Carlotta describes his photographs as being representative of ‘a joyous middle-class cross-section’ of twentieth-century society. In doing so, she actively draws the reader’s attention to the period details that punctuate her grandfather’s photographs and which, according to Barthes, appeal to his/her stadium – to the silk headscarves of the 1960s and the automobiles of the 1980s that make An Attic Full of Trains a veritable catalogue of mid-twentieth-century fashion and design.

At the same time, Carlotta edits di Lenardo’s photographs in such a way that his personality comes to the fore. Whilst some double page spreads are occupied by a single photograph, others are occupied by witty pairings which foreground the photographer’s sense of humour. For example, towards the beginning of the book, a photograph of a woman sunbathing her already bronzed limbs on a balcony is printed opposite a photograph of five fleshy sausages grilling on an outdoor barbecue. In several instances, Carlotta mischievously brings two photographs together to form a narrative: an orderly line of six nuns dressed in monochrome habits seem to be smiling at the two young women kissing on the lips in the photograph on the opposite page, and an elderly man peering through a pair of binoculars is displayed opposite a photograph of an elderly woman doing the same, so that they seem to be peering at each other.

According to Carlotta, such photographs not only reveal di Lenardo’s playfulness, but also the voyeuristic streak in him that fuelled ‘his constant search for stolen images.’ An Attic Full of Trains is full of photographs of family members, friends, and strangers who have been caught unaware or off guard, and whose likenesses are often mediated by windows, doors, and mirrors: reflective surfaces which, functioning as surrogates for the camera’s lens, remind the viewer of the photographer’s presence. The same can be said of di Lenardo’s photographs of his surroundings, in which landscapes are glimpsed from the balconies of hotel rooms and hothouse flowers are trapped behind glass. In a particularly striking sequence of two photographs, di Lenardo’s gaze rests upon the young woman sitting next to him at an outdoor table of a café in an Italian piazza. In the first photograph, the photographer captures the woman’s freckled cheek and her gleaming pair of silver glasses in exquisite detail; in the second, he shifts his attention from his companion to the passers-by she is watching, and who are framed by the right lens of her glasses: a middle-aged mother and her twenty-something daughter who are dressed in chic skirt suits and dark sunglasses.

Approximately two-thirds of the way through the book, di Lenardo’s colour film photographs are interrupted by a sequence of eight black-and-white film photographs that were taken of him during his youth. The first photograph in the sequence is perhaps the most poignant. The only self-portrait in the book, it depicts di Lenardo standing in front of a mirror in a dark interior, his hands clasping his camera to his chest. He is immaculately turned out in a crisp shirt and a pinstripe jacket and he confronts his reflection with a pensive gaze that is beyond his years. The photographs in this sequence are far smaller than the other photographs in the book and, whereas the rest of the book is printed on white paper, they are printed on brown paper. By demarcating these photographs of her grandfather in such a way, Carlotta emphasises their status – and that of the other photographs in the book – as precious mementoes which testify to the man behind the camera whom she knew and loved.