Speaking of African politics, without the politics 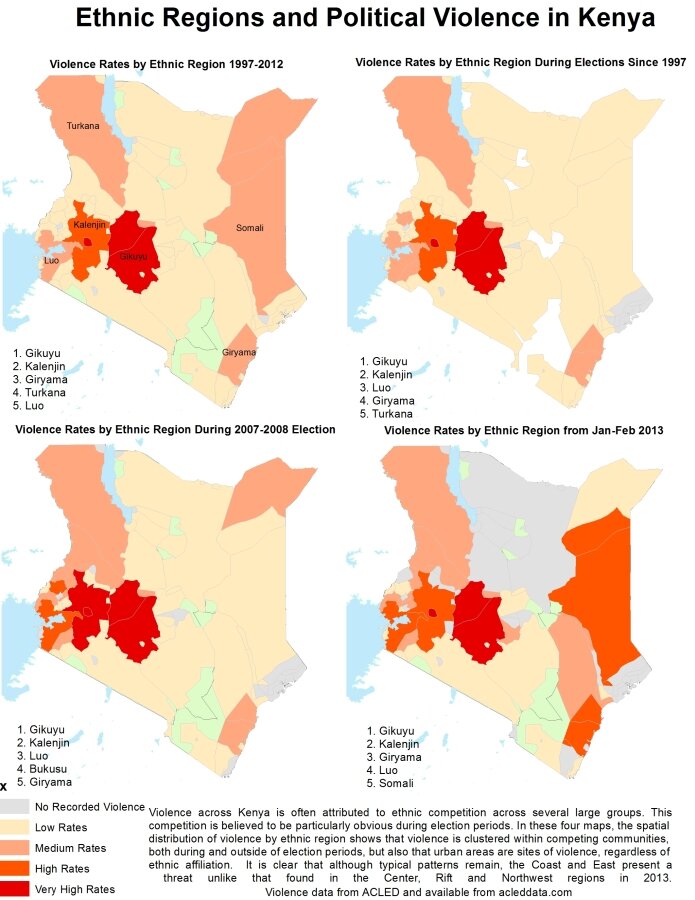 Let’s talk about ethnic conflict and national politics. Take the  example of one country, where an ethnic group makes up 80% of the  population, yet the remaining four ethnic groups exert considerable  political influence. These minority ethnic groups together have access  to strategic locations and their historically entrenched claims to  political power make them powerful. The second largest ethnic group—a  tribe mostly living in the Northern part of the country’s territory—only  makes up approximately 8% of the population, but receives 17% more  state funding per citizen than any other group. In this country three  years ago ethnic minority mobs ransacked private and public property amounting to damage of an estimated £200 million.

Compare this to another country that is dominated by one party that  three years ago secured 59% of votes in presidential and 63% in  parliamentary elections. In this country insurgent groups have  repeatedly staged protests and used physical violence to gain greater  influence over a resource rich region in the South West.

Is one country experiencing unrest because of ethnic tensions, while the other is troubled by economically motivated rebels?

In reality, both societies have a great deal of ethnic diversity. The  examples we showed here are taken from the UK and Nigeria. Their  societies are made from people of different mother tongues, dialects,  and various cultural, religious and racial backgrounds. But this time we  reversed common forms of reporting on these countries. The UK becomes  tribal, Nigeria political. What happened?

Ethnic diversity—differences in language, traditions, belief and  geographic origin—can be traced back to two processes. First, ethnic  diversity partially originates from the days of nation-building. During  these times different peoples and languages were united. The second  source is inter- and intra-continental migration.

Yet when we talk about Western countries, like the United Kingdom, we  tend to attribute their modern day diversity to only one source. We  mainly label those as ethnically different who immigrated to Western  countries within the last 100 years. Scottish and Welsh are not  ethnicities, nor tribes. When territory is contested by the Scottish, it  is not “ethnic warfare”. When parties that are mainly comprised of one  linguistic or regional group, such as the Plaid Cymru, Northern Irish  National Party or the SNP, call for greater autonomy we do not refer to  these conflicts as “ethnic struggles”. We simply do not see these  political conflicts as ethnically motivated. We understand them more as  political claims based on “national identity”.

The language we employ – in the media, in academia and down at the  pub –  takes a very different form when we describe Sub-Saharan African  countries. Let’s take our example of Nigeria. Usually we write and read  that Nigeria is divided between three ethnicities, each in charge of one  federally administered region. When groups vie for greater influence  over the resource-rich region of the Niger Delta, there is talk of  “ethnic clashes” and “tribal warfare”. It is forgotten that these claims  are political, just like they are in the UK. The fact that Nigeria’s  leading party, the People’s Democratic Party (PDP), is represented by  people from all the linguistic and regional groups in Nigeria vanishes  from sight.

Too often Western commentators seem to only admit as a footnote that “ethnic” claims are political. As the Huffington Post reports,  “(t)he country is torn along regional, religious and ethnic lines” and  therefore cannot develop a united strategy against Boko Haram. Regional,  religious and ethnic. When the UK is criticized for failing to deliver a  unified response to terrorist groups, we do not employ the same  triptych. More likely, the mantra would sound: left, right and center,  they never agree. As if we only had a palette consisting of black and  white, our depictions of Sub-Saharan societies often lack the blue,  green and red of political analysis employed for rich, Western nations.  Painting in monochrome, the picture we get is rather black and white.  Our tools determine our analysis.

Nigeria and the UK are just two examples. In reports about South  Sudan, we read of Dinka versus Nuer. “Ethnic violence” is a term  commonly employed to explain the civil war that unravelled in South  Sudan in late 2013. “Ethnic warfare becomes the new normal”, the Wall Street Journal writes.  What follows can be seen as a reasonable account of feuding political  factions, but this all happens under an “ethnic” headline. Insightful  comments get sidelined. A Sudanese refugee, Simon Deng was quoted in The Guardian,  reminding onlookers: “The leaders happen to come from the two biggest  tribes in South Sudan. That’s why it’s being called an ethnic conflict.  It is not. It is a political crisis and it’s very sad”. The fact  that the conflict was triggered by personal rivalry between the  politicians Salva Kiir and Riek Machar has become a side comment. While  ethnic labelling has surely contributed to escalation of the conflict,  the important point here is to recognise that there are also very  rational, political motives at play.

It is important to distinguish between ethnic identification and  political claims. Kiir recruited allies from his family and the area in  which he grew up. Riek Machar practised the same tactics, although his  family networks do not have the same far-reaching access to official  institutions as Kiir’s do. There is nothing surprising about this  practice. Decades of civil war, a power vacuum and a lack of stable  institutions have made politicians more reliant on family networks and  regional support. This overlaps with ethnicity. It is analogous to  Ukraine, where Russian and Ukrainian speakers clash, or in Syria, where  Sunni and Shia wield weapons. The focus on tribal affiliation in the  case of South Sudan obscures how similar these cases are in their  essence: groups with different linguistic, religious and geographic  origins are fighting for power within one nation.

Differences in the terminology we use to describe conflicts in  Western nations compared to conflicts in Sub-Saharan African nations  matter. The categories and labels we assign to groups and issues guide  our analysis. A focus on ethnicity and the preference for reporting  about “tribes”, rather than “political parties” or “interest groups”,  becomes especially problematic if we try to understand African  democracies.

For over 10 years Kenya has performed well in holding free and fair  democratic elections. When violence erupted around elections in 2007 and  2011, the world focused on the ethnic element of these clashes. There  was good reason for this. Any Kenyan will testify to you that tribal  affiliations are still seen as part of people’s identities  (Afrobarometer, Working Paper No. 95). Complex ideas of identity,  however, are often simplified in Western media to statements such as “Kenya is a tense country of rival ethnic groups”. Political dynamics then are, as the Wall Street Journal put it, about “ethnic strife” driving politics.

Undeniably, ethnicity is still part of what defines Kenyan society.  It is part of a whole. Not the whole story. That is where Western media  often goes wrong. Stubbornly staring at ethnic labels, we have a blind  spot for other driving factors that underlie these conflicts. One such  fact is that ethnic affiliations also heavily overlap with geographical  regions and socio-economic characteristics (see map). The Kikuyu  profited more from land redistribution at independence than other  groups. Look at the map a second time and you see that groups have  fought about land and resources mainly in geopolitically strategic  areas, where land is scarce: the Rift Valley and the Coastal region.  This suggests that Kenya’s societal disunity might be related to  rational economic and political grievances rather than banners and  customary dress.

Why is our vocabulary so different when we talk about contemporary  issues in Sub-Saharan Africa to the words we use to describe European  affairs?

The simple answer would be: because our understanding is different.  We are stuck in a circular logic. While there are two sources of  diversity, we tend to view heterogeneity in Sub-Saharan African (SSA)  nations only through one lens – the “natural”, “ancient” and “historic”  one that focuses on differences originating from early nation-building  days. Our understanding of contemporary issues in these societies still  rests on categories introduced by colonialists. Subsequently, we freely  apply categories and labels such as “ethnicity”, “tribal”, “customary”  and “cultural”. Like a self-fulfilling prophecy, the language we use in  our analysis makes our conclusion sound like our starting point: in SSA  conflicts arise from tensions between ethnic identities and tribal  networks.

Sanitising our vocabulary will not be enough. It is not about finding  a less condescending term than “tribal”. The bar for quality analysis  will only be raised when we have come to understand citizens of nations  in Sub-Saharan Africa like we understand European electorates: as  political. If we can grant the England-Scotland debate a rational actor  analysis, we can do the same for Sudan, Kenya or Nigeria.