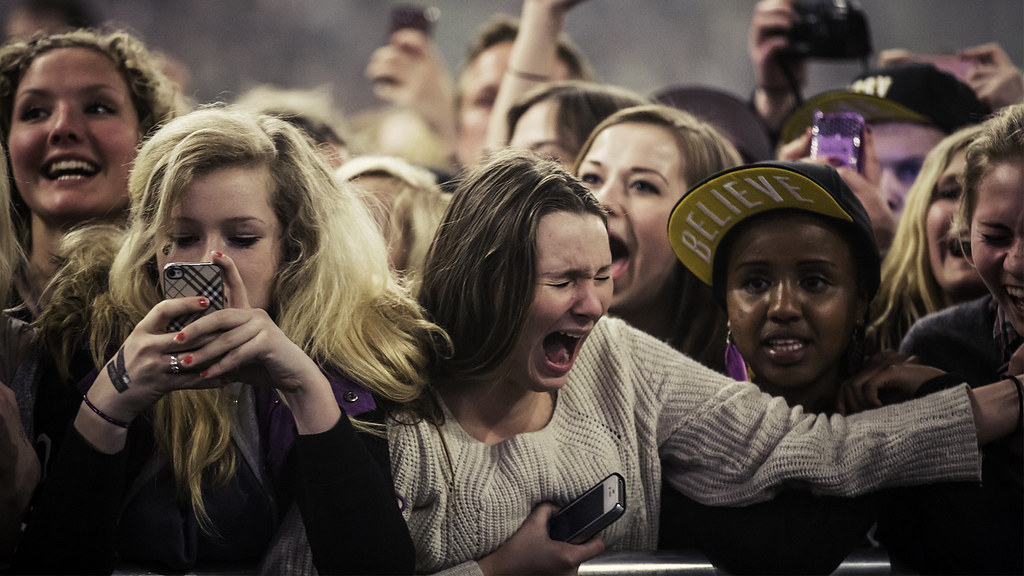 Child stars, the objects of our culture’s raging youth fetish, are  not supposed to grow up. When they do, we regard them with fascination,  concern, and embarrassment, like younger cousins who show up drunk to a  family barbecue. The best option for the ageing child star may be to  reinvent themselves so completely that they sever their current image  entirely from the former one lingering in the public imagination. After  all, people are far more forgiving of drug use, sexual promiscuity, and  criminal activity when they are not being committed by someone who is  widely known to have once been a child.

At 24, Justin Bieber has belatedly grown into the teenage awkwardness  he dodged as an actual teen. His once baby-smooth skin is now dotted  with acne and a faint, greasy-looking goatee. His hair, dyed blond, has  been subjected to a dizzying array of recent styles, including  variations on a quiff, cornrows, and dreads. (“I changed my hair again,”  a 2016 Instagram post reads.  “Get the Justmoji app to see it.”) Like the Kardashians, he harbours a  palpable obsession with Black culture that at times borders on  minstrelsy. Yet there is something extremely, ineffaceably white about  his yellow-blond, heavily tattooed, wife-beater-adorned self. He still,  at least half of the time, resembles a 38-year-old butch lesbian. Debate rages over whether adulthood has degraded his looks to the point that he may no longer be handsome at all.

Like any young person, Bieber is figuring himself out. His Instagram,  the tenth-most popular account on the site, has none of the aesthetic  or conceptual coherence of those other mega-influencers. He reposts  dozens of pictures of his fans alongside photos of himself with other  famous people––as if he is not himself one of the most famous people in  the world. He posts memes, inspirational platitudes, FaceTime  screenshots, joke images, home video-style clips, paparazzi shots of  other celebrities, and also of himself. He once posted the same selfie seven times in a row, and another image, the cover art for his single “Friends,”  a bewildering fourteen times. He shares his opinions with an almost  enviable freedom, posting that “God’s Plan” is “the best video I’ve ever  seen,” that Jayden Smith is “cool” and “adorable,” that Post Malone’s  new single will go “straight to the top,” that “the devil has no power  when you know the LIVING God!”

Born to an Evangelical teenage mother in Canada, Bieber is very  Christian. This is true of most North American child stars of his  generation, including his ex-girlfriend, Selena Gomez (who is the  most-followed individual on Instagram). Even so, Bieber is unusually  vocal about his faith, thereby subjecting it to disproportionate  scrutiny. His recent bad behaviour––punching a fan who tried to touch him in Barcelona, direct messaging a young woman’s place of work in hopes of seducing her––is  not only scrutinised against the memory of Bieber as a doe-eyed  15-year-old, but also the example of humanity’s Lord and Saviour. Bieber  is clearly self-conscious about this. At the start of the year, he  shared a photo of a whiteboard on his Instagram, on which he had written  “Do you feel you have exausted [sic] all options? Do you feel helpless?  Do you feel like you’re never good enough? What if I told you that  theres a god that’s willing to meet you WHEREVER you’re at! What if I  told you he could take away your pain, shame, guit, [sic] and fears  #Jesus.” Adopting a pastor’s rhetorical style, Bieber appears intent on  teaching himself a lesson––whiteboard and all. Yet an undercurrent of  doubt lingers in this message, echoing in those repeated “what ifs.”  “Jesus is changing me from the inside out everyday,” Bieber declares in  the caption. “AND I MISPELLED GUILT and exhausted.”

Though inconsistent and somewhat confused, evidence suggests that  Bieber’s Christianity is also deeply sincere. In 2016, he refused to  play a GOP-sponsored concert, instead posting an image in support of  “Black Lives Matter” on his Instagram and adding: “We are all Gods  children and we are ALL EQUAL.” He eagerly takes up the duties of  celebrity philanthropy, performing at Ariana Grande’s One Love concert  in Manchester last year, donating toys to low-income children at  Christmas, and meeting fans afflicted with illness. “These are the  moments I live for,” he writes. Recently, he was photographed  emerging from a SoulCycle workout in Los Angeles and engaging in  conversation with a small group of homeless people on the street. He  listened, gave them food, and––most strikingly––lay alongside them on  the pavement, his post-spin locks sticking sweatily to his forehead.

Cynics will read this moment, like any act of celebrity goodwill, as a  publicity stunt. (SoulCycle adherents may read it as proof of the  exercise regime’s enlightening effect.) One of the strangest things  about Bieber’s popularity has always been the zest of his detractors.  Even as a teen popstar, he attracted an unlikely number of adult haters;  in 2014, a White House petition  calling for him to be deported swelled to a quarter of a million  signatures. This anti-Bieber zeal is, of course, only matched by the  passion of his fans, the (now multi-generational) Beliebers. To these  fans, Justin is the most beautiful boy in the world: the most talented,  the funniest, and the kindest. In Zadie Smith’s recent essay, “Meet  Justin Bieber!”, she describes the Belieber’s devotion to their “love  object,” a devotion so intense that it traverses the bounds of time and  space: “The love object is already known and loved everywhere. He meets  only those who feel they have already met him, and already love him.  Everyone Bieber meets is a Belieber.” The Beliebers’ steadfast love  endures forever, and they forgive Bieber his trespasses with the same  unbounded love and forgiveness that he, through Instagram, preaches  right back at them.

The Beliebers’ will to find meaning in all Bieber’s actions at times  feels unjust to everyone involved. In July of 2017, Bieber posted a  spray painting he’d made of the word “Always” set against three colours.  This immediately prompted a flurry of speculation over whether the  painting represented his feelings for Selena, while another camp of  commenters debated whether it depicted the Ukrainian flag. “So  heart-touching, love from Ukraine,” one fan wrote, as another chimed in:  “Fuck Ukraine.” “This is Armenia flag ????” a confused voice  interrupted. “Y’ALL THIS IS THE PANSEXUAL FLAG,” someone else declared.

After Bieber appeared in an erotically-charged ad for Calvin Klein jeans, Saturday Night Live produced a parody of the ad,  casting the show’s first out lesbian cast member, Kate McKinnon, in the  role of Justin. “I’m a big boy now,” McKinnon crooned, having perfected  Bieber’s pleading gaze, a dialectic of innocence and sin. On the  surface, the skit lampoons Bieber for the usual reasons, satirising his  youth, his femininity, the effect he has on women.

Yet McKinnon’s performance adds another edge to the satire, one aimed  not at Bieber himself but rather the expectations and desires that have  been projected onto him. Like other femme-faced young men such as Harry  Styles and Cole Sprouse, Bieber is an icon within the lesbian  community. Queer women claim him for precisely the same reason that he  is shunned by many straight people (and particularly straight men):  because he proves that women and girls desire femininity. The  superficial “joke” of the skit––that Bieber is short and baby-faced and  physically weak and pretty––works because McKinnon is also all of these  things, and the joke is therefore undermined for the exact same reason.

Treasured by Evangelicals and lesbians alike, Bieber is an  overdetermined signifier. He is also––as his Instagram reveals––just a  messy 24-year-old forced to spend the last decade living in the shadow  of himself. “Allowing another person to truly exist as a  person—independent of your own fantasies, desires, and feelings about  them, proves to be, I have found, one of the most difficult things in  the world to do,” Smith writes. “Surely especially difficult for Justin  Bieber, who finds himself trapped by the fantasies of millions.” With so  many around the world overinvesting their deepest beliefs and desires  into him, it is little surprise that Bieber is so intent on redirecting  this emotion toward #Jesus. Sidestepping the direct glare of the  spotlight, he can focus on his own journey to be a better Christian and  more “sustainable”  man. “THIS MESSAGE IS VERY GRAMMATICALLY INCORRECT,” he writes in his  Instagram post about his own journey to sustainability. “BUT I THINK  THERE’S SOMETHING SPECIAL ABOUT IMPERFECTIONS!!”