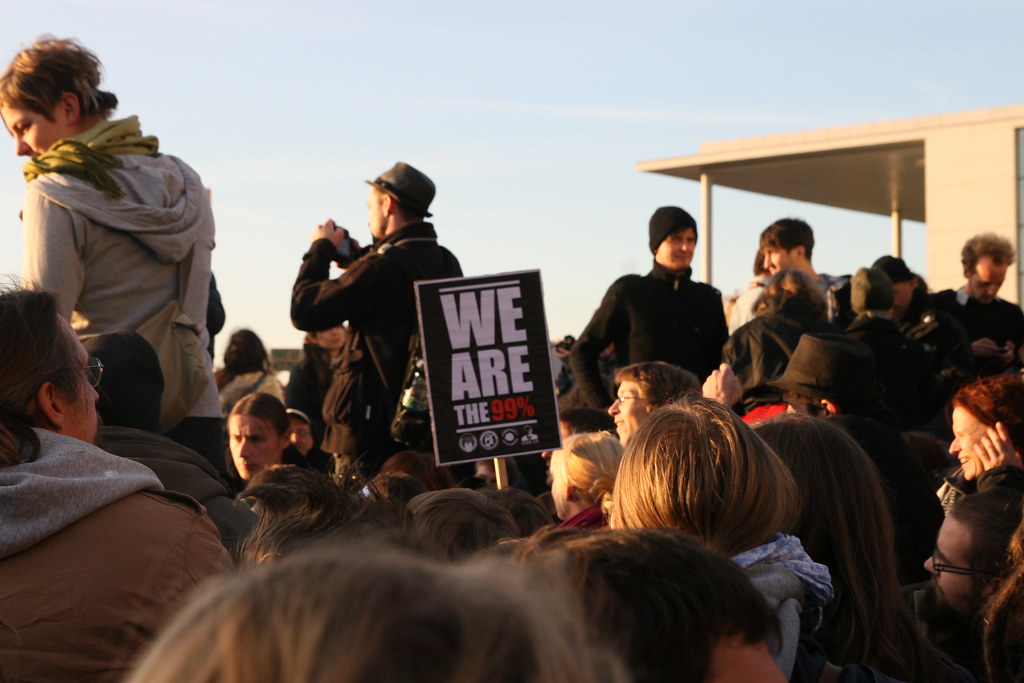 "occupy Bundestag" by KathrinHenneberger is licensed under CC BY-NC-SA 2.0

‘LSE is the epitome of the neoliberal university’, reads the first line of Occupy LSE’s list of demands. Neoliberalism, the occupiers feel, ‘turns the university into a degree-factory and students into consumers.

But is neoliberalism still the major enemy? In his recent article  on the LSE occupation, Eric Royal Lybeck thinks not. Even if  neoliberalism ever coherently existed, an idea he tacitly dismisses, the  term no longer captures the psychology-riven terrain of post-2008  economics.

Certainly, neoliberalism is the latest phrase in a lineage of  nebulous socio-economic definitions. ‘Thatcherism’, ‘advanced industrial  society’ and ‘late capitalism’ have all had their day — now  neoliberalism’s time is apparently up too.

Lybeck wants to dress the big political other in a new frock, one  that lurks nefariously outside of the antiquated university system:  neuroeconomics.

Never mind that neoliberalism was always essentially indefinable — it  is dead: a lifeless ‘zombie’ for naïve schmucks to shoot at, unaware  that their latest foe has slipped past unnoticed. Turn around quick,  because neuroeconomics is already poisoning the village well.

What is neuroeconomics? Lybeck does not provide a single definition  and, in his defence, information about the field is somewhat scarce.  According to the Society for NeuroEconomics,  it ‘is a nascent field that represents the confluence of economics,  psychology and neuroscience in the study of human decision making.’ So  far, so sinister.

In light of this rechristening of our antagonists, should the current  swathe of university occupiers across the world deflate their blow-up  mattresses and go home? Surely the demands they premised their  occupations upon are, with the new world of neuroeconomics, an outdated  fallacy.

And yet, if pluralistic economic thinking is at last beginning to  take hold of economics departments, it is bizarre that universities  consistently reject their occupiers’ demands. Last week’s events at the  University of Amsterdam — in which the police forcefully raided the student occupation  — testify they are also willing to do so violently. Clearly, there is  more political potency to the current occupations than Lybeck’s ‘death  of neoliberalism’ argument would have us believe.

Moreover, neuroeconomics is not wholly distinguishable from the  facets of neoliberalism that Occupy LSE finds so objectionable. We could  even posit that it  is a morbid extension of neoliberal ideology. Once  again, the quantitative logic of economic science is imposed on the  qualitative reality of life. The LSE occupation’s position still stands;  one could even argue that it intensifies the urgency of the protest.  Neuroeconomics’ central lair may be in business schools, but that makes a  re-imagining of the 21st-century university all the more crucial.  Without having universities geared towards critical economic and  political thought, rather than quotas and investment opportunities, who  will challenge neuroeconomic’s psychological nightmare?

While Lybeck undoubtedly has the best intentions by critiquing Occupy  LSE’s fixation on neoliberalism, his article is playing into the sticky  hands of an academic system that, for the last forty years, has stalled  any meaningful political action.

Of course, a healthy pantomime of student protest, too, is integral  to a university’s self-marketing. At an open day shortly after the LSE  occupation began in early March, the university actively drew attention  towards the ongoing occupation. During their presentations to the  prospective students, they claimed that the occupation demonstrated the vibrancy of the LSE brand. (However, as it became clear that the  occupation was going to be a long-term affair, the university management  has since threatened students with legal proceedings.) This is  obviously a classic ploy of power politics. By creating the illusion of  plurality, voices of discontent are drowned out through absorption into the machinery of a dominant institution. Whether we consider  assimilation a mechanism of neoliberalism, neuroeconomics or the dark  lord Lucifer, it happens. Student fees, meanwhile, continue to rise.

Likewise, a quest for conceptual coherence, pace Lybeck,  lapses back into the sanctioned inertia of the modern academy. Granted,  neoliberalism is an imperfect term to describe the post-crash economic  landscape. That may simply be because perfect terms do not exist.  Irrespectively, even if all the big players in corporate finance  have moved from economics departments to business schools as Lybeck  claims, should we thus ignore the injustices that take place within the  UK’s university system? The LSE and the London Business School alike are  not threatened by Lybeck’s thesis. Existing structures of power will  always approve of taxonomic nitpicking, because it challenges nothing.

Occupy LSE is taking another approach. They are demanding what the  university management does not believe to be possible. Rather than  losing ourselves in labyrinthine discussions about what a neoliberal  university is, we should act upon a consensus of what a  university can be. That is the principal aim of the LSE occupation: to  establish an autonomous space in which an education is not propped up by  market forces, the discrimination of workers and politically stalling  webs of bureaucracy. The occupiers intend for their ‘Free University of  London’ to become a permanent feature at the LSE and the other  University of London colleges. Open to both students and staff, the Free University provides an intellectual platform inside – but independent  from – the University of London, a forum ‘organized around the creation  of workshops, discussions and meetings to share ideas freely’ in  isolation from a university that is currently in ‘subordination to  corporate interests’.

Neoliberalism may be ‘dead’, yet the demands of the occupiers still  strike the LSE’s management as unfeasible. Thus far, in a bid to bring  the occupation to a close, the university management has only been able  to offer the occupiers ‘discussions’ — a chance to chat about their  demands once the heat has died down. In the summer term, management  claims, its representatives and the students can sit together around a  table and talk about their demands in a proper, serious environment. As  Occupy LSE well understands, such a resolution would constitute a  gradual whitewash of their demands, a victory for bureaucracy. The  boardroom would once again be validated as the only possible site for  university politics. Occupy LSE does not want its demands diluted by the  hierarchised and business driven structure of the LSE administration.  They want an agreement to be reached after consultations in their own  space and on their own terms.

By rejecting the politics of the boardroom, Occupy LSE’s demands are  affronting to the university’s management; judged by the rationality of  contemporary capitalism, the occupiers are dislocating and strange. And  this is true regardless of whether a coherent doctrine called  neoliberalism exists or not. From Roland Barthes to Michel Foucault to Eric Royal Lybeck, announcing the death of a concept is an academic  cliché. We should stop aping the behaviour that institutional power  expects of us. It is time to start behaving strangely.

This article is partly a comment on a recent piece by Eric Royal Lybeck on this site.