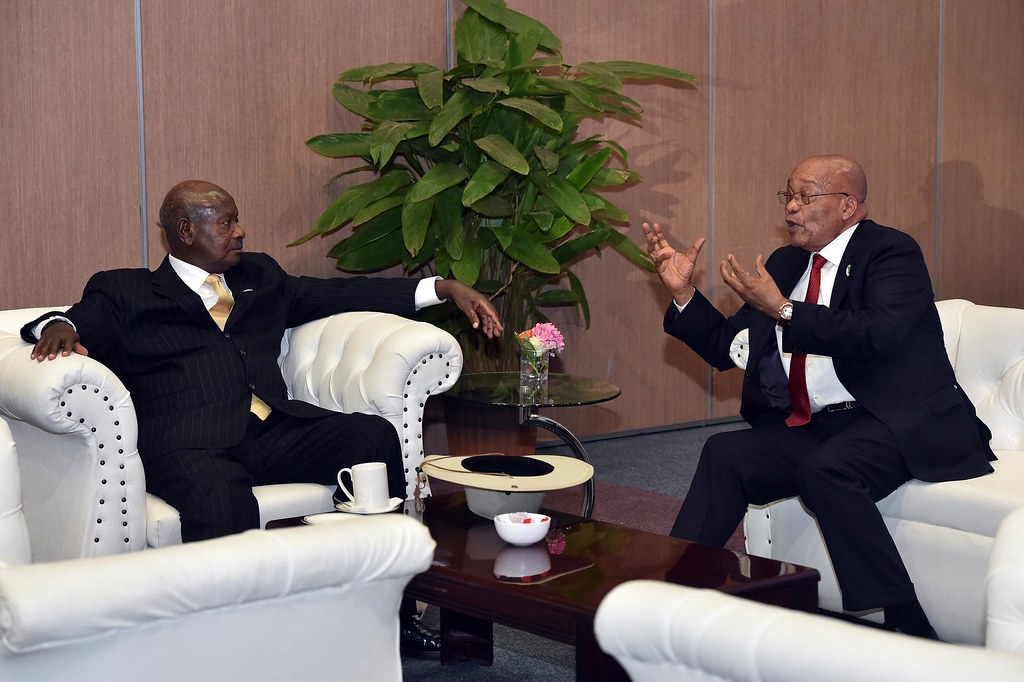 The whereabouts of Blaise Compaoré, ex-president of Burkina Faso,  remain unknown a full three months after his flight from his palace. It  was nearly 27 years to the day when he deposed Captain Thomas Sankara in  a coup d’état.

In 2014, ignoring civil unrest, Compaoré sought to extend his tenure  by another five years via what would have been the second constitutional  amendment for the purpose. Benevolent observers might call his  behaviour bukalu, akin to the Yiddish chutzpah  – somewhere in between courage and audacity. Others would point at his  government’s inability to provide basic services, to pay a living wage  to civil servants and to address hunger and disease. Compaoré is not  alone in extending presidential term limits. President Yoweri Museveni  of Uganda disposed of them altogether when he amended the Ugandan  constitution.Yet both these men deposed their predecessors on the  grounds of incompetence, repression and corruption.

Burkina Faso’s latest coup  had been simmering for over a decade. Between April 2011 and June 2011  marauding soldiers sporadically mutinied over unpaid housing allowances  and other hardships. Merchants held public demonstrations in the same  month and were met with tear gas. Aggrieved students burned down the  ruling party headquarters. They went on strike again in May in support  of teachers demanding improved working conditions. In May 2012 large  public protests against unaffordable price rises of staple foods and  fuel followed. Until October 28, 2014 Compaoré was still tear-gassing and shooting protesters. Only after parliament had been burned down on the 31st, did he agree to step down.

After that there have been two more regime changes. On the morning of November 1st 2014  General H. Traoré declared himself in-charge. That same afternoon Lt.  Colonel Isaac Zida, the interim leader, announced the invalidity of  Traoré’s claim to power. An attempted coup the next day, the 2nd  of November by a female opposition politician was foiled. Once again  the elites scramble for power, a story the continent knows only too  well. It seems we are stuck in an endless cycle of dictators,  revolutionaries and false dawns.

How are these events received in the diaspora I wonder? In the early eighties, the Africa Centre  in London was the hub for the local Africans, usually students like  myself. It was ideal with its location in Covent Garden where the  galleried hall and wooden floors allowed us to feel we were not  slumming, while the need for fresh paint, working door-handles, taps and  other minor maintenance issues were in keeping with the politics of  struggle we liked to think we espoused. African Dawn, a group of modern  day griots performed their resistance poetry there. The five men – three  from Zimbabwe, one from Ghana and one from Senegal – and the Kenyan  woman played the marimba (amadinda, wooden xylophone), lukeme (entongooli, thumb piano), ndingidi (lyre), all types of drums and the electric guitar.

Ben Okri  dropped in once, just after he had published Incidents at the Shrine.  Although he was approachable, it was too noisy for conversation. African  Dawn also performed Ngugi waThiongo’s The Trial of Dedan Kimathi.  From the piece I learned that the Mau Mau were not commanded by Jomo  Kenyatta although he is still credited for leading the fight for Kenya’s  independence. Our efforts even went mainstream, with Woza! Albert, a South African play that came to the West End via the Edinburgh Festival.

A few years later Miriam Makeba played at an East London community  hall. Her eyes were the same as on her albums from the 1960s, large and  penetrating. Mozambique had become independent and she sang A Luta Continua,  the old freedom song she used to perform for Frelimo. I think it was  Makeba, but it could have been a character from Woza! Albert who asked, “Hapa matota?” or “Where are the men”: where are the people who are going to change things?

Despite what melancholic lyrics may suggest, they exist – the men and  women who want to change things. In the months leading up to the 2006  elections in Uganda, there were demonstrations outside the Central  Police Station and the High Court where an opposition presidential  candidate, Dr Kiiza Besigye, was first detained and then brought to  trial. The big open air Nakasero Market is located a mere 200 metres  from there. On one of the trail days, I found the market deserted.  Everyone was at court, I was told. The vendors only came back at  lunchtime. As I learnt over the coming days, their commitment was  striking: day after day the market vendors attended court in solidarity  with Dr Besigye. By contrast, office-workers stayed at their desks. You  do not win government contracts by demonstrating in the streets.

It is not only anonymous groups of men who are trying to change  things. Back in his time, Steven Bantu Biko, like the market vendors of  Kampala,was one of the men willing to give something up for the common  good. A medical student in apartheid South Africa he founded a students’  union, and the Black Consciousness movement. Blessed with discernment,  Biko wanted his countrymen to be freed psychologically as well as  physically from the damage done by years of subjugation and humiliation.  He called it Black Consciousness, seeking to “infuse the black  community with a new-found pride in themselves, their efforts, their  value systems, their culture, their religion and their outlook to life.” He was only 30 years old when he was murdered in prison in 1977.

Of the men, who want change, some also make it to State House.  Unfortunately this often happens by force. When Captain Thomas Noël  Sankara became president of Burkina Faso, he faced the same challenges  as his contemporaries in Ghana and Uganda. They  had all reached their  positions by means of coups d’état; once at the top, they each found  their country’s coffers depleted by their corrupt predecessors. The West  was willing to help with the rehabilitation. The only condition: that  the leaders sign up for IMF economic structural adjustment programmes.  Should someone who actually needs micro-finance really borrow a large  development loan without hope of ever paying it off? Was there really a  choice?

For Sankara there was. He declined all offers. His disagreement with  what he called “debt imperialism” became the centrepiece of many of his  speeches. “We can produce enough food to feed ourselves….Malheureusment,  for lack of organization we still need to beg for food aid. This type  of assistance is counter-productive and has kept us thinking that we can  only be beggars who need aid…I am asked ‘Where is imperialism?’ Just  look at your plates, you see imported corn, rice or millet. C’est ça, c’est ça, l’ímperialism. Let’s not look any further [i].”  He may have seemed naïve but within the four years of his presidency,  food production increased from 1,700 KG to 3,800 KG per hectare [ii].  The infant mortality rate, fell from 280 deaths to below 145 for every  1,000 live births. Sankara addressed the issue of sprawling slums by  embarking on a massive house building and upgrading project. He was the  first African president to launch a reforestation programme. In less  than two years of Sankara’s presidency, school attendance jumped from  about 10% to close to 25%, significantly reducing the 90% illiteracy  rate when he assumed office [iii]. All of this without IMF help – or debt.

It is heartbreaking to watch the video footage [iv]  of Sankara appealing to his fellow presidents to repudiate unfair debt  agreements with IMF and other foreign creditors at the Organization of  African Unity Summit in 1987. He accused them of degrading their people.  He says, only half-jokingly that if they do not support him he is going  to be assassinated: “I may not make it to the next meeting.”

Sankara saw that Burkina Faso would be isolated by the West if it  stood alone on this point. But his fellow presidents, one assumes most  with pan-Africanist pretensions, didn’t step in. At the Africa Centre  his name did not come up much. We had nothing to offer, or we offered  nothing by way of support. Sankara was shot the same year, dismembered  and buried at dawn in what was widely believed to be a French-backed  regime change.The closing footage of Sankara’s home shows an adobe  building with wooden shutters. Inside are his prized possessions; his  motorbike and his guitar [v]. His  widow Mariam Sankara describes him in terms reminiscent of Biko’s  conscious black man, “Thomas knew how to show his people that they could  become dignified and proud through will power, courage, honesty and  work. What remains above all of my husband is his integrity.”

His successor Blaise Compaoré promised to “rectify” the revolution  and promptly signed up for structural adjustment, bringing Burkina Faso  in to the dubious embrace of the IMF/World Bank. Ironically, a week  after Compaoré’s flight from the Presidential Palace with Parliament in  flames, Sankara’s recorded speeches were selling on the streets of  Ouagadougu and his icon is held up at demonstrations.

On the face of it, General Yoweri Museveni, the Ugandan president,  seemed of similar mettle to Sankara. Anecdotes confirming his  revolutionary credentials arrived thick and fast in the diaspora. It was  said that at State functions he drank from plastic (or was it tin) mugs  rather than long-stemmed wine glasses. (It is possible he was merely  adjusting from the bush war.) He too repudiated debt as a solution to  all that ails Africa. But after an attempt to barter trade with  neighbouring countries he gave in to the beckoning finger of the North.

Museveni’s IMF/World Bank prescribed Civil Service Reform Programme  has possibly made the bureaucrats more corrupt than in 1986 when he  seized power. His daughter was flown to Germany in a Lear jet to give  birth to her child at a cost of GBP 70,000 if you believe the British  media or GBP 20,000 if you believe Government. In either case, his  official statement was clear, “When it comes to medical care for myself  and my family there is no compromise [vi].” The  families of the 16 women a day who die in childbirth for lack of  essential drugs, properly motivated (or simply paid) staff and lack of  equipment held their peace.

Agricultural reform in Uganda was meant to be brought about by The  National Agricultural Advisory Service (NAADS). It was funded to the  tune of US$100m over 8 years, with US$ 50m repayable to the World Bank.   The project review after 8 years reported “no significant differences  were found in yield growth between NAADS and non-NAADS sub counties for  most crops….[vii].”

A pattern emerges. Genuine agents of change die young. Either they do  not make it to State House or they die while there (with the possible  exception of Jerry Rawlings in Ghana). Such is the dynamic. The rest capitulate early while continuing to assume the demeanour of  revolutionaries. They can do so because Western powers are willing to  turn a blind eye to their increasing profligacy in return for their  signatures on a succession of documents keeping their countries in debt  bondage. They rule for decades, well in to old age at which point they  usurp the role of Elder Statesmen and receive credits due to others [viii].

Museveni is more like Compaoré than Sankara; both are revolutionaries  gone rancid, tampering with presidential term limits,obsessively  nepotistic, with a legacy of luxurious edifices for their own delight,  high maternal and neo-natal mortality rates, high unemployment,  unstinting Western support including unlimited supplies of tear gas and  total disrespect for the people they lead. Hapa matota?

[I]Thomas Sankara. The Upright Man, A Film By Robin Shuffield, 2006.

[Iv]Thomas Sankara. The Upright Man, A Film By Robin Shuffield, 2006.

[Viii]  For Example In Spite Of Spurious Claims, Sankara’s Government Was The  First On The Continent To Acknowledge Aids As A Problem And To Attempt  To Deal With It.`