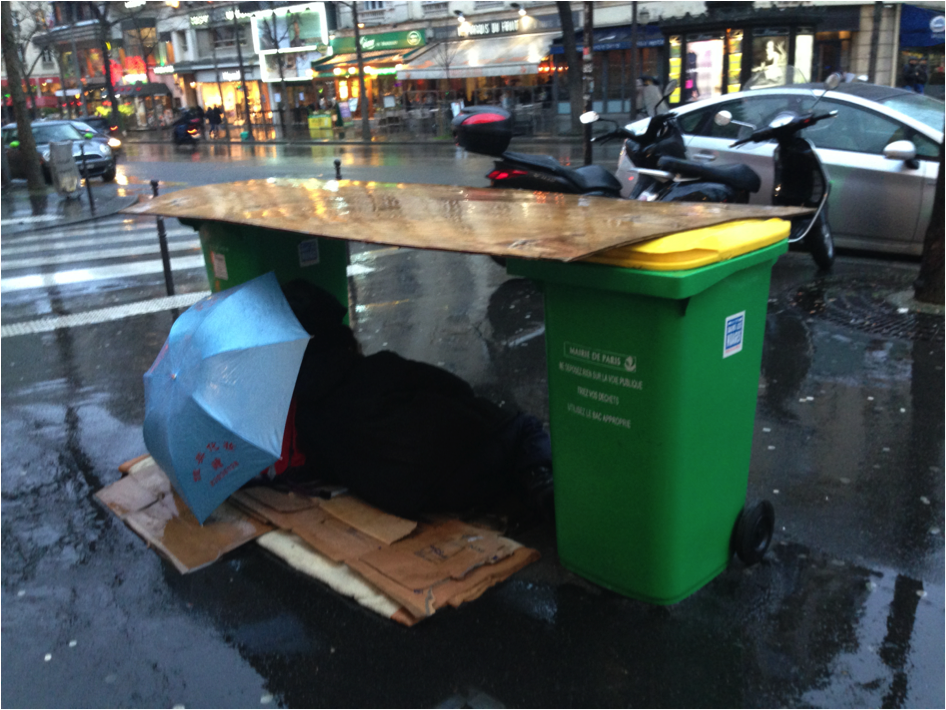 ‘Pas de logement = pas de vie’ – ‘no housing = no life’.  A couple  of months ago, posters with this slogan appeared all over the North of  Paris as part of a campaign to raise awareness about the over 40,000  homeless people living in the French capital. The posters send a simple  message: if you don’t have a roof over your head, you can’t live  properly; you can’t exist decently. Without a fixed abode, life is not  worthwhile. Living on the street means being life-less. Perhaps the  posters caused the odd commuter, shopper, flaneur or café-goer to look  twice at a homeless person they might have otherwise ignored; perhaps  they even lead some people to stop and talk to one of these purportedly  “living dead.” To me, however, the message of the campaign seemed odd.

I work with people on the street on a daily basis as part of my PhD  fieldwork. I volunteer in a homeless day centre as well as a van giving  out harm reduction material for drug users – everything from syringes to  crack pipes – several times a week. I lived in a homeless hostel in the  South of Paris for a month earlier this year and spend a considerable  portion of my day on the street talking to people. I observe how these  people struggle, how they desire and fight, how they want and aim. I  observe them living.

The people I talk to on the street – people who beg, sleep rough,  take drugs, abuse alcohol – don’t have a roof over their heads; they are  ‘sans abris’ (without shelter) and ‘sans domicile fixe’ (without fixed  abode). They often live under terrible conditions in the dirt of the  pavement, sleep on the bare concrete, or on subway vents to stay warm,  are dependent on charities and the pity of passers-by to survive. But  they are far from lifeless and, in many ways, they are far from  home-less.

Many of the people I regularly see spend a lot of  physical and emotional energy on making their home on the street.

When Johny  prepares his bed for the night, the first layer consists of cardboard  boxes ripped into pieces. The outline of the paper marks a frontier  between private and public, separates Johny’s space from everyone  else’s. A softer layer of thrown-away carpet and a kind of fluffy  mattress makes sitting or lying more comfortable. Johny then cuddles up  with a duvet once preparation is complete. A large backpack and a simple  plastic bag house Johny’s most important belongings: bottles and  a  spoon, sometimes a shaver and most importantly a sharp knife; some  clothes to change into and a bowl for his dog. Food and drink come in  the separate shopping bag. For his dog, Johny always prepares a little  extra space, another piece of cardboard where he puts his bowl and a  blanket. If Johny is lucky, the police allow his makeshift home to exist  semi-permanently for a couple of days or a week. However, they often  move him and his belongings more regularly.. Every night, Johny will go  through the same routine again either in the niche of a house, on a  doorstep or in the corner of a block of flats; sometimes on a bench in a  park or an abandoned phone booth.

Homeless people are perhaps most visible and identifiable to the  public through acts of home-making like the ones I described for Johny.  Yet the practice of ‘home-making’ extends far beyond the creation of a  physical space. Feeling safe, secure and warm requires far more than a  place of dwelling; home goes beyond the physical.

Some of the homeless people I work with on the street are Hindu. They  found each other on the street usually having come to Paris on their  way to England. They left India to make money in Europe – or to escape  the threat of prison. The train station where the longed-for link to  England leaves from became their natural gathering place. It offers a  setting in which begging can provide a  meagre income and a certain  environment of security due to the hoards of police on guard to protect  France’s infrastructure under the Plan Vigipirate.  In the evenings, when the business of the train station has ebbed down,  they sit together in a circle, hidden by a secluded bus stop right  behind the station. Taking turns with a beer, they enjoy their Pinnis, a  traditional Punjabi nutty sweet, and exchange stories from their past:  the golden temples, the strict rules in the family, their wife at home.  They speak together in their native Punjabi and start singing Punjabi  songs together when it gets really late. These moments remind them of  home. Eating familiar vegetables, tasting familiar spices, speaking  certain phrases, pronouncing certain sounds, certain looks on familiar  faces, certain gestures – all this makes them feel comfortable even when  sitting on the bare concrete behind the train station. These things  remind them of the houses, the neighbourhoods, the families, the past  lives, the cultural surroundings they left behind and helps them  re-create some sense of comfort, of security, of home. On the one hand,  these rituals invoke sadness: the loss of home. On the other, they  provide a sense of purpose, something to work and fight for: ‘home’ as  an aim for the future.

Another important dimension of ‘home’ which comes to the fore in the  extreme environment on the street is the family – or more often the loss  and lack of it. Take Alex, for instance: a young man from Denmark who  was kicked out of the military because of his alcoholism and struggles  with the absence of his son and his ex-wife from his life.  He left them  behind in Denmark, a country which he abandoned after it abandoned him  as he explains: “I fought for my country, put my life on the line. What  do I get now? Just about 150€ a month from the stupid welfare office.  They can keep that money. They didn’t take care of me after two of my  comrades died. Now, I don’t feel like going there anymore.” Home is not  his fatherland anymore, the land he was born in. He feels betrayed by  the state and its representatives. He doesn’t even like speaking Danish  anymore. That’s one of the reasons why he left for the continent. Paris  was his first stop a couple of months ago and he hasn’t yet found a  reason to leave. The only things that still tie him to Denmark, are his  son and ex-wife – his family as he conceives of it. “I really miss my  son. He is almost two now. He needs me and I want to be there for him. I  want to be with my family.”

Home is far more than a roof, a fixed place to sleep, a bed in a cozy apartment. Being at home is also about feeling at home, about feeling safe, warm, comfortable. This feeling can  come from the built environment, from a roof over one’s head. But a  roof is not enough to create a home. Experiences, memories and  aspirations turn it into something more than just the bricks and mortar  it was made with. And a roof doesn’t even have to be made with shingles;  sometimes it is a cardboard-box or a tarpaulin stand in – be it out of  necessity or choice.

A home is never a static entity; it demands continuous making and  re-making, both materially and spiritually. Such home-making requires  work and creativity – something that a lot of the people I have observed  and talked to on the street possess. As more and more of the world’s  population become displaced in search of new son the street nd better  homes, it is time we deploy the same work and creativity in re-thinking  the very concept of ‘home’: what does ‘home’ mean?

This question is not only relevant for the supposedly home-less but are important in a myriad of contexts: the  housing crisis in London, rents in San Francisco and New York, people  in Myanmar are losing their homes to floods , the recent razing of the  slums of Islamabad, the massive migration to cities in China or the  current migration crisis in Europe.