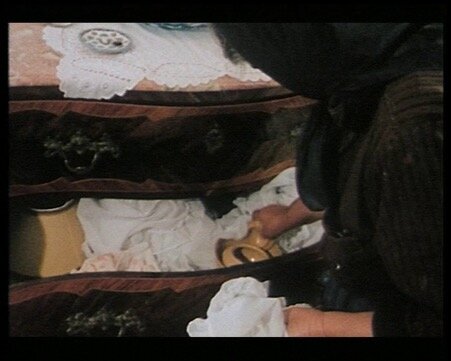 It was on his arrival in Lisbon 1975 that the German filmmaker  Thomas Harlan first heard about Torre Bela, the occupation of the  Portuguese aristocratic Lafões’ family farm by its former workers in  Ribatejo, central Portugal. Harlan had driven to Portugal in the spring  of 1975 with a group of friends, motivated by a desire to document the  Portuguese socialist revolution.[1]  Francis Pisani, one of Harlan’s associates, said that for those living  in central Europe, ‘Portugal was the revolution at the end of the  southern highway. Instead of the Cuban, the Chinese or the Chilean  Revolution, which were far away, you got in the car and you arrived  there’ (Costa, 2011b, 69′). [2]

In joining the people in Torre Bela’s farm, the international film  crew documented one of the most important events of the land reform in  the revolutionary process. However, the presence of the film crew was  not a neutral one. Forty years after the launch of the film Torre Bela (Harlan, 1977), Portuguese director José Filipe Costa interviewed Torre Bela’s protagonists and crew members for the film, Red Line. (Red Line, Linha Vermelha, 2011) When talking about the making of the film, Harlan told Costa in the interview:

I believe that objectively, with camera in hand, we were  manipulators. How that actually worked, I do not know. But it pushed  things forward, rushed them. There was a pressure that came from us.

Harlan’s interview invites questions about the presence and  interference of the director and his crew in the unfolding of the events  in Torre Bela. Are Harlan and his crew mere observers or professional documentarians/journalists? Can Torre Bela give a clue about how image production helped to forge an historical event in revolutionary Portugal?

The longest dictatorship in Europe (1930–74) was overthrown on the  25th of April 1974 by a revolution led by the military in Portugal. The  Portuguese dictator António Oliveira Salazar had ruled the country for  almost five decades, followed by Marcelo Caetano, who governed until the  outbreak of the revolution. The new system that came about in 1974 was  pitched against the dictatorship’s ideology, which had been based on  repression, censorship, poverty and colonial imperialism (in Angola,  Mozambique, Cape Verde, Guinea-Bissau, São Tomé and Príncipe, and  Macao). Led by the Armed Forces Movement (Movimento das Forças Armadas – MFA)  and anti-fascist political organisations, the socialist revolution bore  the challenge of bringing many different things to the political  agenda: public education, housing for all, unionisation of the labour  force, decolonisation of overseas territories and land reform.

The PREC (Período Revolutionário em Curso, or Ongoing  Revolutionary Process) is the name given to the two-year transition  period from the end of the dictatorship to the first free elections,  during which many of the planned transformations took place. Land reform  played an important role in changing working conditions, land  distribution and the organisation of workers into cooperatives. In this  context many occupations took place across the country; however, the  occupation of Torre Bela was unique in its nature: it became a national  reference point for political transformation and social justice.[3]

Torre Bela’s occupation stood out for two main reasons. First, it was  an occupation led only by its former day labourers and local  inhabitants. Although similar occupations were happening across the  country, this occupation was unique for the absence of a political  party’s involvement. Many of the squatters from the surrounding villages  were illiterate, came from families that had lived under the Lafões  family’s oppression for generations and were participating in direct  political action for the first time (Rezola, 2007).

Secondly, the event was committed to memory by means of Harlan’s  documentary film, shot as the event unfolded. Looking at the documentary  film and the presence of Harlan and his crew in Torre Bela, the  formation of the event can be deconstructed into the following elements:  agents, setting, script and repetitions. Almost like a staged scene in a  film, events, such as a revolution, are composed of multiple small  stagings and restagings. The film Torre Bela (1977) and an  analysis of its making can give insights into the mechanism of  production of an event, thereby providing ways of understanding how it  is represented and how it plays out.

With similar motivations to those of the militant films shot in Portugal during the same period, the film Torre Bela[4]  is the documentation of a self-proclaimed independent community of  peasant workers seizing control of the estate where they had worked for  generations. The film takes us directly into the internal working  processes and contradictions of the revolution. However, Torre Bela manages to step out of the common tropes of other films that documented the historical process.

By neither employing the everyday political language typical of radio  and television of the period, nor by producing a congruent narrative  towards a political and social message of emancipation of Torre Bela’s  workers, the film is a unique example of the period’s documentary  filmmaking. The shooting of the film overlapped with the people’s action  in the building of a new social order and the emergence of a new  political awareness. What drove the making and editing of the  documentary was not an expository framing or voiceover, which drives,  makes, frames or organises images. Instead, Torre Bela is  edited into a linear narrative that follows the events in the farm, from  the public meetings and discussions in the square to the formation of  the cooperative. Despite its realistic tone, the film maintains a  certain spatiotemporal and narrative unity from which the squatters’  contradictory actions and doubts emerge (Costa, 2011). The scene of the  occupation of the palace is a good example of how Harlan conserved the  frictions, complexities and ambiguities of the event.

Staging the Occupation Scene and the Space Behind-the-Camera

The absence of a voiceover or the presence of the filmmaker was an  unusual feature within militant cinema made in the same period.  Alongside the scene of the palace, these elements start to raise  questions around the realism of the documentary. While the people gather  outside the palace before entering the property, the camera films the  palace’s interiors. It is only after the camera has wandered for a few  seconds inside the building that the squatters enter it and are seen  grabbing books, trying on clothes and examining the belongings of the  aristocratic family. Judging by how the occupation scene was filmed, the  camera must have been placed inside the palace before the squatters  entered. The sequence of the scenes yields questions regarding the hows and whys of the filming as well as about Harlan and his crew’s agency in its staging.

Thomas Harlan and his crew were not mere observers or even  professional documentarians or journalists. After taking over the land  and means of production, the workers were afraid to take the next step:  occupying the palace (Costa, 2012). The director, wanting to speed up  the process, acted behind the scenes as an emissary to the military  police and arranged for a meeting between them and a group of squatters  in a military headquarters in Lisbon. During that meeting, captured on  film in Torre Bela, Captain Banazol tells the squatters: ‘You  should not wait for a legal decree that states you can occupy it. Occupy  it and the law will follow’ (Harlan, 1977, 69’). With this statement  the squatters’ forthcoming action was legitimised.[5]

At the same time, despite Harlan’s assertions, the narrative emerging  from the event as a result of the film-crew’s pure manipulation seems  too simplistic. This glimpse of the presence and influence of the  film-crew does not invalidate or undermine the revolutionary  emancipation of the rural workers, but expands the event’s space of  production. What was seen as the cause of the event – i.e. oppression of  the people leading to the occupation of the local bastion of  aristocratic power – cannot be seen as the only element fostering the  emancipatory episode. Harlan and the crew – those behind-the-camera (or  the unseen) – are therefore also participants in the incident, albeit  acting backstage.

Harlan brings his knowledge and political awareness into the  orchestration of the events, and moulds the sequence according to his  own revolutionary grammar – including how the occupation of the palace  should be seen by the camera. In this way, the cinematic apparatus,  sitting between the occupiers and the film-crew, operates as a mechanism  that renders the single event into a complex set of interferences  beyond what is visible and audible. Thus, the cinematic apparatus is  simultaneously that which brings something into visibility and turns it  into a thinkable matter as much as it fosters and participates in the  unfolding of that event.

[1] Another Country  (Outro País, 2000), Directed By The Brazilian-portuguese Filmmaker  Sérgio Tréfaut Shows Directors, Photographers, Journalists And Activists  Who Travelled To Portugal In 1974–76 To Document The Event, Including  Robert Kramer, Thomas Harlan, Glauber Rocha And Sebastião Salgado.

[3]  However, As Time Passed And Neoliberalism Edited And Demonised The  Initial Socialist Politics, Responses To The Events At Torre Bela Began  To Limbo From Admiration To Contempt.

[4] According To José Filipe Costa’s Research: ‘torre Bela  Was Presented For The First Time At The Cannes Film Festival 1977. It  Was Only Released Commercially In A Portuguese Theatre In 2007, Although  A Dvd Version Had Been Circulated In 2004 As Part Of A Cinema  Collection Promoted By Público, A Leading Portuguese National  Newspaper. The Rights For The Film Were Sold To Italian, French And  German Tv Channels. Footage From Torre Bela Can Be Found In At Least Two Other Portuguese Films, Bom Povo Português (1980) And Lei Da Terra (1977)’ (Costa, 2012, P. 5).

[5]  Harlan Even Asserts That The Position Of Partner In The ‘unlawful’  Occupation—a Role That He Believes Should Have Been The Army’s—was  Actually Taken By The Film-making Team. (Costa, 2011)